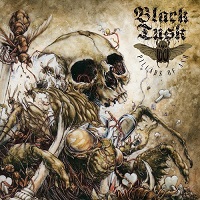 You know, all of these bands with “Black” in front of their name sure can confuse the easily confused, which would be this writer. Black Tusk, unfortunately, are easy to confuse with Black Cobra, who are easy to think of as Black Anvil, who thankfully to mix up with Black Breath, although it could be done. But who gives a flying you-know-what, right? Black Tusk, have been sludging it out for over a decade now, having made a nice little impression 2011’s Set the Dial, their most recent full-length before the one in question, Pillars of Ash.

Perhaps rightfully aligned in the punk-on-sludge mold, Black Tusk manages to whip up a storm, in part, because of the three-pronged vocal attack the band so easily employs. And when Black Tusk starts-a-bulldozing, like on “Desolation of End Times,” is a pretty feral assault. Less concerned with getting bogged down in distortion-ville, Black Tusk manages to keep their songs tight and taut, like the battering “Damned in the Ground,” or voluminous “Still Not Well.” Elsewhere, the punk-leaning “Punkout” (of course, as evidenced by the title) and “Leveling,” lend just the right amount of ‘tude and heaviness, two elements most bands of this ilk can’t seem to get right.

Unfortunately, the 2014 death of bassist/vocalist Jonathan Althon casts a shadow on the release of Pillars of Ash. But let’s give ample credit to the Black Tusk dudes for forging ahead, coming back with an album that surpasses its predecessors. Whereas the sludge scene routinely forsakes attitude and spirit, Black Tusk, clearly, have it going on with Pillars of Ash.