Beyond the Black – Heart of the Hurricane (Napalm) 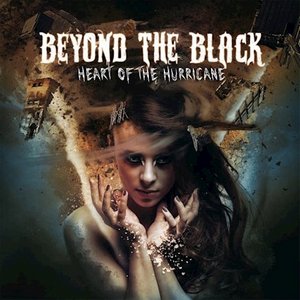 Building up a formidable reputation in the symphonic metal scene, Germany’s Beyond the Black have previously released two albums on smaller labels, and now find themselves among the Napalm elite. With a sound that draws from the Within Temptation/Delain template, the biggest question that the pivotal third album brings, is whether they are going to stick to their guns, or explore a bit of uncharted territory?

Those who have gotten into the band on previous releases will no doubt grab onto the familiar sounds of opening cuts “Hysteria” and the title track. Big, symphonic numbers as the band has been capitalizing on in the past seemingly shaped into the seeming perfection of their particular brand. But as the album progresses, with more and more tracks that pass, it is clear that the band feels more comfortable in their own skin, and propel themselves further into more unique territory. The most notable direction that they are going is into more melodic fields. “Million Lightyears” and “Dear Death” still retain the driving metallic qualities that the band strives for, but don’t hold back punches when it comes to rock/pop melodies. It’s an addictive sensation, and the album’s strongest moment might be the sweeping “Fairytale of Doom,” which also brings in a bombastic chorus that reaches for the stars, yet the crunching guitars and glorious solo makes it one that many will gravitate towards.

Gorgeous ballads also await, bringing Jennifer Haben’s striking vocals to the forefront, with “Escape from the Earth” and “My God is Dead” providing the usual (slightly) heavier undertones, but the one that sells it all is “Breeze.” A moment that belongs to Haben completely (think “Love’s A Burden” magnified by a power of ten), the minimal accompaniment ends the album on a magnificently touching sentiment. But to get to said beauty, you have to traverse some of the band’s heaviest cuts to date, in an interesting and playful juxtaposition. “Scream for Me” begins to ratchet up the guitar volume, with some strong drumming and a melodic solo, while “Freedom” downtunes the guitars to a modern level that may take some aback, but it completely works while standing apart from the rest of the tracks. Haben’s towering vocal performance pack a wallop, but the rest of the band really proves their worth with the approach to variety on this effort and noticeable riff presence.

More pleasantly diverse than one might have expected, Beyond the Black begins to toy with the genre conventions on their most complete effort to date. Heart of the Hurricane will please fans of the band and genre, but tweaks the formula in some needed ways – be it in gentle melodies or explosive heaviness. It’s blend of addictive, genuinely emotive, and raise your fist fun makes it easy to listen to on repeat, also further paves the way for Beyond the Black to strengthen their claim as a rising force in symphonic metal.