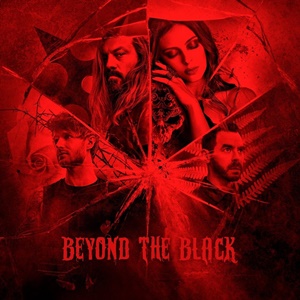 Symphonic metal/hard rock has achieved great chart action globally – allowing many artists to move up the ranks on festival bills plus receive prime headlining tour opportunities. German band Beyond the Black are one of those newcomers steadily establishing themselves as a reliable force for the movement since the mid 2010’s. Now onto Nuclear Blast for a new worldwide deal, this self-titled effort is the fifth full-length – delivering ten songs that establish the wide array of catchy hooks, melodies, and vast sonic combinations that make this genre an appealing style to many heavy music followers.

The distant, echoing scream of Jennifer Haben leads to a spirited, mid-tempo crunchy riff template for “Is There Anybody Out There?” – her soothing melodies demand your attention while the guitar work of Tobi Lodes and Chris Hermsdörfer showcases a mix of old school/modern metal textures, the small acoustic instrumental sequence a surprising twist near the back half of the arrangement. There’s a certain unification flow to the track listing – Celtic elements a potent part of “Reincarnation” along with Chris’ savage growling background vocals that slither in and around Jennifer’s main duties, while “Dancing in the Dark” has a stadium, arena-rock feel between the drums, softer to louder vocal delivery as the chords ring out in a cascading, anthem-like charge you hear from Def Leppard or Kissin’ Dynamite. Even the softer songs such as “Free Me”, “Wide Awake”, and closer “I Remember Dying” possess this veteran sophistication, the pacing or smaller details from keyboard/orchestration to diversity in verse/chorus execution very noticeable as musicians who comb through their work to get the best elements into each song, all in economical, radio-friendly arrangements.

Many people would say that this self-titled record from Beyond the Black pushes together a lot of their symphonic metal past and the exploration of modern hard rock/arena-rock elements that appeared on their last two records. This scribe believes in a just world, we would be hearing these songs actively blaring on terrestrial radio during peak daytime/afternoon hours, so that the band could get stronger tour packages going as this is thoroughly engaging, exciting material that has viable commercial appeal.