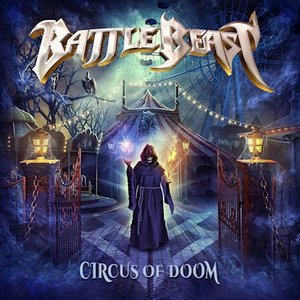 Now six albums deep into their discography, Finland’s Battle Beast have made a name for themselves in the combination of pure heavy metal intertwined with that of some pop and rock influences.  Their last album, No More Hollywood Endings, saw that pop/rock injection really stand out for the band and it made for some very fun and addictive songwriting.  Enter Circus of Doom, in which the band continues that direction with full confidence and vigor.  Though it feels heavier overall, they’ve done a thorough job of placing those more non-metal influences into the mix seamlessly.

If you’ve been listening to the last few Battle Beast records, you should have a pretty good idea of what to expect from the onset.  There’s some absolutely steamrolling tracks, full of epic riffing and melodies that are all but destined to raise the spirits of live audiences.  “Freedom” and “Wings of Light” answer that calling this time around, and they pack plenty of energy into their runtimes.  There’s also some completely danceable tracks, fusing that pop spirit from a pure metallic viewpoint, such as the wisely chosen single “Master of Illusion” and the bouncy chorus of “Armageddon” will not relent until you start moving along with them.  Perhaps that is Battle Beast’s strongest asset.  Despite the tempo or overall heaviness of a track, they find ways to make it memorable and completely loaded with hooks that refuse to let go.  Even a more gentle, yet epic in scope track, like “Where Angels Fear to Fly,” can sink its teeth in – whether it’s Noora Louhimo’s charismatic vocals or an energetic riff.  The softer opening to “Eye of the Storm” quickly gives way to a fist-raising chorus, and one that you’re sure to be smiling along with as you shout it out.

Circus of Doom continues to see Battle Beast doing what they do best.  At this point, you more or less know if you are going to dig their sound but those who have been enamored by the band’s metallic yet uber-catchy knack for songwriting are going to play this one on repeat with ease.  Fun, upbeat, and full of just enough metallic fury.