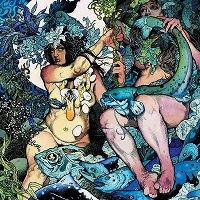 Lots of fuss over these guys and it’s totally warranted. Rarely does a band justify the hype generated by the press, but then again, we’ve propped up a lot of bands

that sank faster than they could ever swim. Baroness is one of those “swim” bands if you will, a character-driven, earnest quartet, born and bred in the South that sounds Southern without wiping our nose in it. They’re not really akin to one band. And Blue Record is marvelous to the max.

One of the main selling

points behind Blue Record is how textured it is. Riffs (of the textured kind, obviously) overflow and they’re unique, almost daring at times – just check out the harmonized swindle of “Jake Leg,” which is more metal than it should be. Lead cut “The Sweetest Curse” unfurls a sultry, down-home chorus that offsets the grueling, mid-tempo riffage that is born from the onset, while the fun and jangly “A Horse Called Golgotha” keeps in check with the band’s frazzled indie rock

A series of acoustic interludes/quasi-songs break up the album nicely in the form of opener “Bullhead’s Psalm,” “Steel That Sleeps the Eye,” “Ogeechee Hymnal” and “Blackpowder Orchard.” It’s a bit reminiscent of what Corrosion of Conformity did on their totally underrated Deliverance record and it serves the purposes of heightening the main tracks mentioned above. And let’s not sleep on “O’er Hell and Hide,”and “War Wisdom and Rhyme,” two songs

that exemplify Baroness’s burly bottom-end and penchant for melody.

Fact of the matter is Blue Record is a deep record. It’s a record’s record, if those who still buy the damn things understand. It almost eclipses the band’s brilliant Red Album, but does outshine nearly everything that has come out in 2009. We’ll gladly buy into the hype and continue to serve these guys on a sliver platter, as Blue Record is an album not to be missed or ignored. If so, you’re doing yourself a mighty disservice. 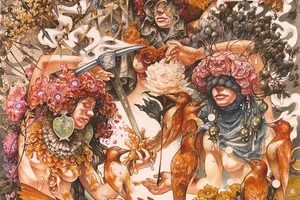