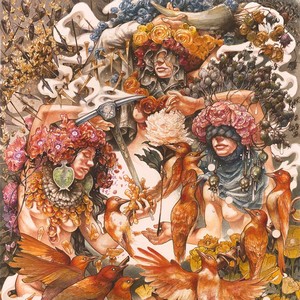 My initial introduction to Baroness came in the Spring of 2010 while the band was on tour with Valient Thorr, Between The Buried And Me, and Mastodon. Barring the concerns Baroness faced during that era in the shadow of Mastodon, the thing that stuck with me on both nights of that tour was the vocal check before the band played: a bellowed GA. Or that’s how I remember it anyway.

It’s notable only because by and large almost every instance of John Baizley’s clean vocals have sounded exactly like that GA: a bellow. This isn’t inherently a bad thing as the band has evolved around that vocal approach and it suits the frequently high energy, rock’n’roll till death spirit the band carries. It doesn’t, however, always make for engaging listening.

Gold & Grey (previously considered Orange, befitting its phenomenal cover art) is the latest and reportedly last in the band’s exploration of colour-based approaches. It’s big and sprawling and strangely formulaic despite that as the songs come in three forms: regular (~4 minutes), interludes (<2 minutes) and epics (~six minutes). There are ample versions of all three and this pattern carries over almost verbatim from Purple.

There are highlights to each: early single “Seasons” is fucking stellar. Frenetic drumwork and bass dominate the song as it swerves from point to point, a kitchen-sink approach that pays off in being visceral and even moving. The surprise blast beat (the only time it makes an appearance) is indicative of where the album’s strengths tend to lie: measured, controlled exploration. “Cold-Blooded Angels” sees the vocal delivery tone down the Wall O’Baizley (also allowing new guitarist Gina Gleason’s voice to shine through in support) and build toward several satisfying (and typical high energy) conclusions.

She’s a new voice, replacing long-tenured guitarist Pete Best in 2017. Initially I was excited by the news of her joining given that it could bring a new vocal dynamic to the band. While she is occasional audible, it’s only that: occasional. The fantastic rhythm section that joined the band for Purple returns and it’s a good they’re in top form: the much-maligned (well, in certain internet circles) mix has them jacked way up in front. Your mileage will vary.

In line with the formulaic approach to the songs, there is a peculiar sequencing to the album at large, being high energy at its front and back ends and quiet in the middle. At 17 songs and an hour run time, it’s a little unwieldy. Late-album “Broken Halo” and even opener “Front Toward Enemy” are fuzzy exercises in bland, high energy jaunts that go nowhere in particular.

Gold & Grey is not the first album to bear the positive and negative fruit alike from studio time spent in the throws of experimentation. In the regard it’s almost a response to Purple even though the structures that define it are largely the same in execution. “Emmett – Radiating Light” is a sparse, incredibly meditative piece, particularly effective because it isn’t a ballad (though it is close to the ballad, the piano-driven “I’d Do Anything”). “Pale Sun” is a low-key jazzy excursion that allows the album to largely melt toward a pleasing close (until it doesn’t, jarring vocals overwhelming in the end). The mix of these elements works well and makes for a memorable end.

It’s likely the band could have come out with a tight 39 minute album experience and felt individually unsatisfied as it would have simply been Purple II. I can appreciate the desire to push beyond and do something new even if all of the results do not resonate. I like a lot of things about Gold & Grey. When it’s on fire it’s really on fire. When it isn’t (particularly in its back half) it really isn’t. But the journey and the growth that comes with that journey means trying things out to see what works and what doesn’t.

With Gold & Grey you get a lot of both. 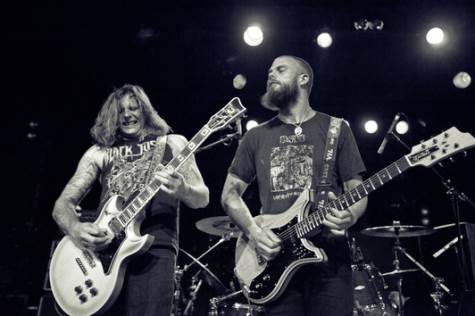