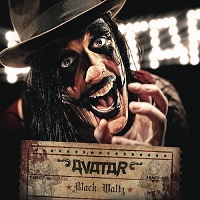 The Black Waltz, eh? You know, Kalmah has an album with the same title, albeit with a far less goofy cover and far more guitar solos. Not like Sweden’s Avatar know or care (they probably shouldn’t), and being that they fall on the other side

of the metal spectrum as the Finns, it’s a moot point. It’s just funny when two albums share the same title and sound nothing alike. Now, Kalmah would have a real problem with Avatar if they started singing about swamps…

Falling somewhere between Static-X, Rammstein and Marilyn Manson circa 1996, Avatar certainly have a strange ‘ole brew on their hands with The Black Waltz. In most cases, such a concoction would blow up in the band’s face, especially with those leaning more on the extreme and “true” side of the fence, but there’s some legitimate ideas to be found here. It’s amazing what happens when some good, memorable ideas are strung together, regardless of context.

There’s a hefty industrial girth to most of the album, characterized largely by thumping drum beats of the militaristic variety. In turn, it allows songs

like “Torn Apart,” “Ready for the Ride,” and “Let it Burn” to have an instantly catchy quality to them. The rhythms will move you, surprisingly enough. Buried somewhere amidst the American-derived industrial fray are scant hints at melody, some of which come to define album highlight “In Napalm,” which possess an insanely groovy riff, one that Wayne Static or Manson himself couldn’t write on their best day. It comes to define the album, and is Avatar’s shining moment alongside the melodic title track.

There’s a bonafide market on these shores for a band like Avatar. All of the elements, right down to the band’s S&M, eyeliner-happy image are there. The Black Waltz is infinitely better than it’s presented, which might support a long-believed theory that all the good metal comes from Scandinavia anyway. That’s not entirely true, but it’s a credit to Avatar for taking industrial metal and actually doing some good with it.