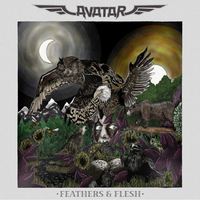 After testing the waters in the home of melodic death metal (Gothenburg of course), Avatar finally seemed to find a sound that fit them back with their fourth album, The Black Waltz. 2014’s Hail the Apocalypse saw them treading similar ground but Feathers & Flesh take things a bit further for the band, as delivering a 70-minute concept album tends to do (at least by those who do it right).

Sure, Avatar still sounds like the Avatar that they developed with The Black Waltz, but how many other bands do you hear that can deliver the solid melodic death metal inspired riffing alongside the carnival atmosphere? Simply more Avatar would have been a fine theme to run with, but with the concept, it seems clear that they wanted to branch out. And with an album of this length, it comes with not much in the way of filler or wasted time. This is due to the dynamics of the tracks themselves, with a nice range of sounds. There’s the punchy and riff-driven “Tooth, Beak, and Claw” (complete with a surfer rock riff), the (purposely) repetitive nature of “For the Swarm,” ballad-esque “Fiddler’s Farewell,” the upbeat and catchy “Night Never Ending,” and epic finisher “Sky Burial.” It’s a compliment to the band that they can shift between the more traditional metal material and take a moment to spice it up. “One More Hill” does a good job of balancing some heavier material and moving into melodic parts and “Black Waters” has an almost Nevermore with Southern groove feel at points, which shares space with some clap-inducing quieter segments.

While the image of the band may still give them some tug-of-war with the dyed-in-the-wool portion of the underground community, Feathers & Flesh is one that should be checked out by this very section due to its tendency to try some new tricks along the way. Maybe there’s a part that may take things too far for some, but it’s a trip that’s worth taking if you are tired of the same old thing.