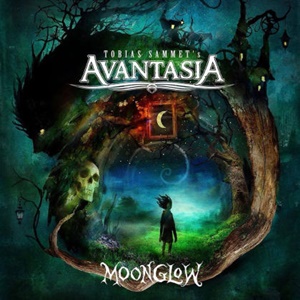 Spending almost twenty years putting out these albums, what Tobias Sammett of Edguy originally saw as a side outlet concept one-off effort with Avantasia has now blossomed into a full-fledged operation – performing shows where they can in Europe and North America, plus consistently releasing albums. Assembling a superstar ‘who’s who’ in the hard rock/metal world for guest vocalists that can switch in and out depending on availability and the record to record needs, the general public has embraced these outings to the point of chart topping and award-winning entries. Moonglow is the eighth studio record – an eleven-song odyssey that continues to encompass Tobias’ theatrical/ musical vision and push the parameters of what followers usually expect in project format.

Immediately starting the record with the almost ten-minute epic “Ghost in the Moon”, the piano/Tobias-led vocal melodies tandem against the supporting orchestral/guitar movements definitely fit into that Jim Steinman/Meatloaf category, the arrangement shifting between those restrained tender verses and the uplifting rhythm guitars and keyboard/choir support. The follow-up “Book of Shallows” features Avantasia at a heavier, power angle, the muscular guitars and double kick support perfect for the diverse vocals on display – Hansi of Blind Guardian, Jorn Lande, Ronnie Atkins of Pretty Maids, and even Mille of Kreator contributing to the dynamic driving nature this cut delivers. Tobias certainly knows how to put these prime-time professional musicians in all the right spots – Candice Night fueling the angelic, almost-Nightwish title track offering, while Geoff Tate’s phrasing and bold delivery makes “Alchemy” a second half highlight in that older Queensrÿche way. And those who are happy to have Michael Kiske back into the Helloween-fold should rejoice in his work during “Requiem for a Dream”, a power metal delight with Tobias matching brilliantly during the Teutonic chorus to Michael’s upper falsetto mastery. The record closes on an intriguing cover, the 80’s Flashdance soundtrack classic “Maniac” – it’s not necessarily bad, but the stunted guitar during the opening moments and slower rhythms aren’t as satisfying as the original.

Considering the ambitious undertaking as far as songwriting, recording, and assembling all these singers to do their parts, Avantasia really continue to be at the top of their game for the brand of symphonic power metal they bring to the table. Moonglow contains the diverse aural palate from ballads and straight- ahead anthems to longer, epic arrangements necessary to keep listeners interest, and await more stunning live performances down the road.