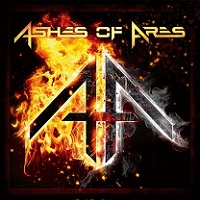 A Matt Barlow/Van Williams combo in the early 00’s would have set the North American underground ablaze. Now…not so much, but it’s not their fault the two bands they were so intrinsic to (Iced Earth and Nevermore) either stalled out or split altogether. The two have teamed up in Ashes of Ares (guitarist Freddie Vidales rounds out the lineup), a band that is not Neverearth or Iced More (that sounds so dumb); rather, a bit of a fresh dig at traditional metal, with Barlow out front, rightfully leading the charge.

With both Barlow and Williams having long established their reputations as players (more on them in a second), it’s up to Vidales to do most of the musical legwork. At times, he’s drifting into Jon Schaffer territory (“Move the Chains”), others, he’s got the melodic know-how and structuring abilities to fend for himself, like on the reflective “On Warrior’s Wings” and triumphant “Dead Man’s Plight.” Bear in mind that his style isn’t predicated on becoming a top-rung shredder, meaning, he’s here for the song, and to serve it. More guitar players should take note.

Barlow was always the best thing about Iced Earth, even their ballads, which is why the aforementioned “On Warrior’s Wings” clicks; same for “The Answer,” a quasi-ballad that showcases the ever-emotive side of Barlow. Dude is identifiable as they come, too. Williams doesn’t fly off the handle as much as expected, so he’s reliant on finding unique patterns (“The Messenger”) while playing more of a standard time-keeper role.

Sure to hit upon the Iced Earth throng who fancy Something Wicked This Way Comes or Horror Show, Ashes of Ares’ approach to melodic metal is one shuttled in from experience, and the hope of not sounding too much like their previous bands. Barlow can’t sound anymore Barlow-like, so we get the relation there, but it’s the songs that snap, ultimately providing a foundation for what should be a fruitful second career.