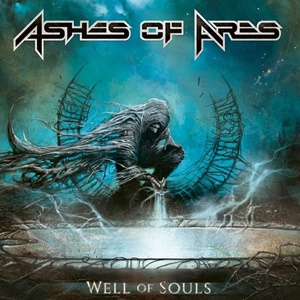 Five years removed from the self-titled debut album for Ashes of Ares, general life situations arise to change up many aspects of the group. While Matt Barlow and Freddie Vidales remain the main components for songwriting and execution, drummer Van Williams stepped down even as he appears on Well of Souls with Ghost Ship Octavius becoming his focus, and the band gained a fresh record deal leaving Nuclear Blast for Rock of Angels Records. Considering the players involved, many thought the band would cross the lines of Nevermore and Iced Earth in terms of a style – but it’s clear even on this sophomore outing that Ashes of Ares prefer to craft a mixture of traditional and progressive influences beyond the normal comfort modern power/thrash zone these musicians have established in previous work.

Vidales provides a steady stream of powerful chord progressions and underlying melodic tricks to his guitar and bass action – and not necessarily racing with the tempos, letting arrangements evolve at a steady traditional pace for “Consuming the Mana” or the Jag Panzer-like follow up “The Alien”. The brooding layers for “Soul Searcher” allow Matt to shine in his emotional versatility, a doomy ballad where he captures aural attention because of his mid-range bellow and shining higher hold out money notes. At other times the band venture into some modern extreme textures where the riffing can be more brutal and Van slams down on the kit – “Sun Dragon” and “Time Traveler” illustrating some of the connection to latter day Death with progressive, stair step picking and adventurous buildups/ transitions. “The God of War” handles the namesake of the band lyrically, again allowing Matt to showcase multiple personalities in terms of the gritty to falsetto-oriented vocal parts featured, Freddie taking on an exotic, arpeggio-fueled lead break against some swirling, low-tuned riffs. There are hints of Iced Earth in a song like “Let All Despair” (many will hear “Watching Over Me” similarities in feel and the clean to cultural flow), and the closing cover of “You Know My Name” from the James Bond film with Chris Cornell pays tribute to his amazing voice and spirit.

Well of Souls will appease those who love melodic metal with progressive, power, and modern elements that illustrate the band’s affinity for various styles and not losing the plot cohesively.