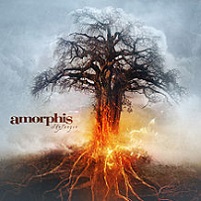 Is Eclipse not the best “return-to-form” album of the past decade? It is, right? Seriously, Amorphis’ 2006 opus has proven to have more staying power than most albums with that “hey, we’re going back to our old sound” characteristic, so why not stay in tow with that? Said release’s follow-up, 2007’s Silent Waters followed suit, but was a notch below and to be frank, Skyforger is another notch below that. Not that Skyforger isn’t without merit, ‘cause it is, but Amorphis might be getting a wee bit comfortable with their settings.

The third album with singer

Tomi Joutsen (who our own MetalGeorge gives “savior” status to), Skyforger maintains that sinewy, gentle ebb that Eclipseushered in. There’s no real aggression here, save for the direct knock-off of Opeth’s “The Grand Conjuration,” “Majestic Beast” which is a clunker. But for the most part, Skyforger rides Joutsen’s er, majestic voice, and Esa Halopainen’s lead guitar

Some graceful moments pop up during the chorus of “Sky Is Mine” and the opening strands of “From the Heaven of My Heart,” which have a nice, Tuonelafeel to them. Probably the same can be applied for “My Sun,” which doesn’t leave much of an impression. “Highest Star” and “Course of Fate” do recall the more glorious moments of Eclipse, which emerge as the more redeeming moments on the album.

Fact of the matter, is that Skyforger was probably a comfortable album for Amorphis to make. They’re past the debacle that was Far From the Sun and now fully distanced from former singer Pasi Koskinen, so the outcome of Skyforger doesn’t come as much of a disappointment or surprise. It’s gratifying, yes, but no landmark, which you can’t expect every time out…unless you’re a demanding prick…