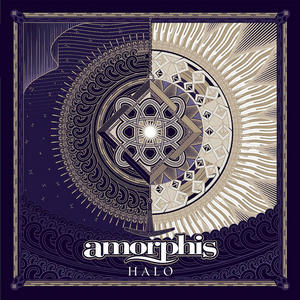 Continuing to ride an uncanny level of consistency over the past decade (and one could argue that it’s even longer), Amorphis have released some rather impressive albums that fit into their sound while providing something genuinely captivating.  Queen of Time was an absolute gem of a release (already 4 years old too), and their follow-up in Halo takes no time in showing that Amorphis have lost none of their magic.

Truth be told, Halo does have a similar vibe to its predecessors.  Building on the pathway from their last two releases (Under the Red Cloud and Queen of Time), Halo stays within reason sonically.  But with the level of songwriting and hear for ‘knock you off your feet’ melodies, it’s really tough to find an argument against it.  After all, no one really writes the way Amorphis does, therefore it doesn’t lose any of its charms, particularly after a four year drought.  “Seven Roads Come Together” is just as fine an example as any, with the band’s exotic riff formula merging with some slightly bombastic/epic elements, and a tantalizing melody that is sure to send some chills down more than a few spines.  The way that they maneuver melodies into the tracks is still one of the band’s fortes, with each one really having at least one hook that’s going to reach out and grab you.  It can be the ending of the opening cut, “Northwards,” with a driving riff with a beautiful melody layered atop Tomi Joutsen’s roars, or something more mellow like the gentle “My Name is Night,” which almost acts as a fitting lullaby to finish off the album.  Between said tracks, you’ll find a banquet of melodies, tempos, and emotions as the band fires off more of their best material.

Amorphis has all but cemented their status already over the years with breath-taking material that draws from numerous genres to generate their unique formula.  Halo doesn’t mess with that, instead again pushing the limits of what the band can do in polishing what works for them.  Fans should be thrilled at the results once again, and find this release just as stunning as anything else the band has recorded.