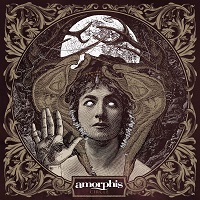 Tomi Joutsen’s dreads are so long they could form a superhero cape. His voice is as soft as a babbling tributary into a Finnish lake. His roar is that of a bear emerging from winter hibernation…upon a black winter day, naturally. Some of this may come across as hyperbole (Joutsen’s dreads are insanely long, though), but the fact of the matter is that the vocalist has had more to do with the re-shaping of Amorphis the last eight years than anyone. The band’s focus shift onto him continues to bear dividends, as evidenced by their tenth album, Circle.

Hooking up with noted Swedish producer/Hypocrisy mainman Peter Tagtren gave initial credence to a mid-90’s joyride , one that would cull upon the grace and grit of Tales and Elegy, but Circle has more in common with the 2009’s Skyforger and 2011’s The Beginning of Times than their glorious past. You’ll get the burly quake of “Shades of Grey” and “Hopeless Days,” along with the gentle “Mission,” which almost immediately emerges as a track of note thanks to an outstanding verse selection. “The Wanderer” steals the show with a rousing chorus, while prog goes on display during “Nightbird’s Song” and “Enchanted By the Moon.”

Amorphis has come to master the art of creating mini-climaxes without having to pad their songs with pointless musical exercises. It’s all so compact with the Finns; they continue to churn out these hummable, likeable, and memorable jams on Circle that’s not as much routine as it is perfection of art. Plus, that Joutsen…has there been a more impactful late-career addition than him?