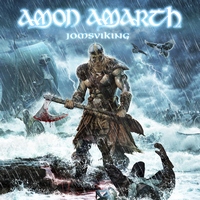 At this stage of the game for Amon Amarth, you can walk in pretty much knowing exactly what you are going to get. After really establishing themselves in both Europe and North America over the years, they’ve come to the point where they don’t need to keep everyone on their toes as to what their next album is going to sound like. The band is basically synonymous with Viking death metal at this point. But let’s not forget what got them there in the first place – they are one of the best at what they do, and Jomsviking works as advertised.

That’s not to say that Amon Amarth didn’t push themselves with Jomsviking. Their first attempt at a full concept album (based upon, you guessed it, Jomsvikings) does have a certain appeal to it, but had you not known it, it wouldn’t have made a huge impact on your listening to it. Within the framework of the concept, Amon Amarth continue to do what they do best. Opening cut (and first single) is impossible to hear without imagining the band in the live setting. Johan Hegg’s easily enunciated growls are sure to have the crowd shouting along, and the galloping pace is sure to get everyone moving as well. Some other highlights include the slower and groove-based “Raise Your Horns” (with chant-along section) and more blistering melodic pace of “On a Sea of Blood.” Doro Pesch makes an appearance as the song “A Dream that Cannot Be,” and the duet with Hegg is an effective one, even if the beauty/beast vocal dynamic is the bread and butter for many other bands.

Continuing the same route as their last few albums, Jomsviking is more of the same quality metal that we’ve come to expect from Amon Amarth. No jaw-dropping surprises, no breaks from their formula – just melodic death metal done right. Kudos to them for continuing to spread the word and finding ways to keep that formula intact and somehow keeping a feeling of freshness to it with each album.