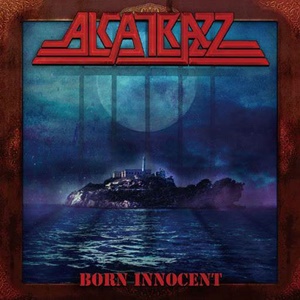 Back in the 1980’s when shredding guitarists gained acclaim, Alcatrazz as a band reaped those benefits beyond the notable front voice of ex-Rainbow singer Graham Bonnet. When you have Yngwie Malmsteen, Steve Vai, and Danny Johnson on your first three studio albums, it’s evident the axe play would be fluid and neoclassical in execution. While there have been reunion shows, live albums, and box sets – it’s taken 24 years to have the latest studio record Born Innocent hit the streets. Main members Graham along with bassist Gary Shea and keyboardist Jimmy Waldo welcome Graham Bonnet Band drummer Mark Benquechea in the picture – along with seasoned guitar maestro Joe Stump to bring another heavy metal meets shred showcase proving these veterans are alive and kicking these many years into their careers.

Alcatrazz excels at that see-saw balance between showcasing individuals in proper spotlight positioning, yet never wavering from the solid tempos and individual song construction to generate a boatload of takeaway hooks, melodies, and harmonies. As a guitarist Joe Stump will probably remind most of Malmsteen when it comes to sweeps and arpeggios, but he can also execute some bluesy, slower breaks – both of which are present on the pumping anthem “London 1666”. Throwing around some Rush-like progressive interplay between the drums, keyboards and guitar maneuvers, “Dirty Like the City” offers Graham some sinister high barreled action and note holding, as well as gritty midrange charm that always makes him one of a kind. Old school 70’s keyboard tones make “Something That I Am Missing” intriguing, the off-beat nature of the verses against the music setting up a mysterious atmosphere that pays off in a majestic vocal-oriented chorus. The record has adequate dynamics from the more commercial-oriented affairs like the title cut and uplifting/positive nature for “Finn McCool”, then providing contrasts in the darker, swanky “Body Beautiful” or the lone epic “Warth Lane” at 6:15 which illustrates the band’s clean to grandiose levels within the same track on a psychedelic level. Add in some killer guest guitarists for lead breaks like Jeff Waters, Chris Impellitteri, and past alumni Steve Vai, along with Riot V bassist Don Van Stavern appearing on five tracks and you have no shortage of reason to feel aural ecstasy throughout.

Normally a 13 song, almost one-hour record can be a daunting proposition to go through consistently, as it’s hard to maintain top-notch songwriting and performances in 2020 no matter who the artist is. Born Innocent though contains a treasure trove of melodic heavy metal with the right bluesy/shred inflections to be more than worthwhile for fans of the genre, fans of the band, and hopefully newfound followers added to the mix.