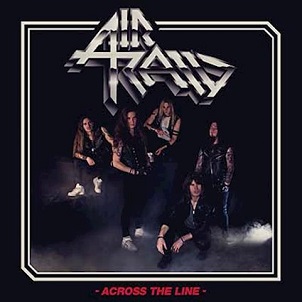 Frankly, there is no comparison between Air Raid’s new vocalist Fredrik Werner and their previous, Arthur Anderson. Anderson, nasally, thin and trebly, bore little conviction on the band’s 2014 Point of Impact album. Werner, on the other hand, is bred from the classic school of metal vocalists, taking his cues from Graham Bonnet and perhaps a more current comparison, Rick Altzi of At Vance and Masterplan fame. Adding Werner to the mix is going to do a lot of good for the Swedes, starting with Across the Line, their third full-length.

Arguably just a “pure” metal band without the usual sub-genre tags we like to throw in, Air Raid encapsulate power, speed and traditional on Across the Line. There’s the obvious adherence to traditional metal norms by way of the band’s chord and note choices (you’ve heard these all before), but the songs are rather punchy, in particular, opener “Hold the Flame” and its follow-up “Line of Danger,” the latter boasting some crisp chorus moments from Werner. The album reaches its high-point on the instrumental “Entering the Zone Zero,” which features a rather killer main riff that just rollicks along with the steady double-bass drumming of David Hermansson.

Air Raid and Across the Line are textbook all the way, surely galvanizing (and appeasing) purists. Then again, there’s no need for acquired taste here; this is how heavy metal was supposed to be all along. Combined with the emergence of Werner (where has this guy been hiding?) and the Swedes appear to be poised to make inroads on the Euro metal circuit. Above all else, Air Raid have simply recaptured old glory and re-packaged it for 2017. No complaints here.