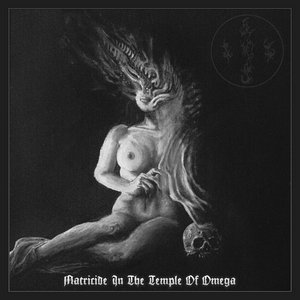 Whew. The maelstrom is vast and it is relentless. Likewise is Matricide In The Temple of Omega, the second album released by the exceptionally prolific Matron Thorn under his Ævangelist banner this year. Unfortunately with all that output it may be indicative of a lower traction rate individually as while this isn’t the most sprawling black metal release I’ve indulged this year (that honor goes to Altar of Perversion), it’s hour length unfortunately feels quite long for what it is.

And what it is is a swirling, suffocating darkness. These tracks seethe and churn, a dissonant center with a cacophonous fury in perpetual high gear spiraling around it. Throwaway introductory track aside, there isn’t much thematically, conceptually, or compositionally separating any of the tracks here. Drop in to the 14 minute mark of “Ascending Into The Pantheon” or the seven minute mark of “The Sonance of Eternal Discord” and you’ll find yourself swimming in samey waters.

It isn’t bad but it also isn’t particularly compelling, especially when taken in a single sitting. But I suppose that’s the nature of being dragged into an abyssal-bound whirlpool. As you work your way to the center the view doesn’t particularly change, a lot of disorientation and noise. Then when the silence greats you at the void after the journey is gone, the crush is what resonates. It works here.

But you’ve been warned.