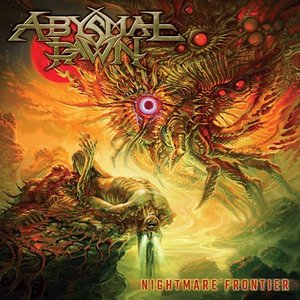 Two years ago, Abysmal Dawn released their fifth album, Phylogenesis, their first release in six years and also their first for Season of Mist Records.  Their newest release Nightmare Frontier is a short EP meant to offer fans a taste of something new until the band delivers their next full-length.  And to that end, fans will certainly not be disappointed with what Nightmare Frontier has to offer them.

With four songs in total, 2 new and 2 covers, it’s a quick and digestible little bite of the band’s aggressive yet memorable death metal.  The two new songs hit hard and fast, with opener “A Nightmare Slain” diving right into the good stuff – blastbeats and vicious speed yet retaining a memorable aspect to the guitar riffs (just enough technicality to perk the ears without being too overtly fancy too).  Some raging grooves slow down the follow up “Blacken the Sky” just a tad, and crank up the memorability – the riffs are incredibly hooky in that mid-tempo range but the band never loses their steamrolling intensity either.  The two covers go in very different direcctions and are actually quite fun.  In Flames “Behind Space” flexes the band’s more melodeath-inspired tendencies, and it gives the track a more brutal feeling to it without losing touch with the original’s direction.  Lastly is Candlemass’ “Bewitched,” which slows the band down to a doom-y crawl and allows Charles Elliot to unleash some killer croons for a majority of the track.  Despite the cleans, there’s still a bit of Abysmal Dawn to the song, giving it an even heavier feeling that really rumbles the speakers.

Nightmare Frontier is a great sample of what Abysmal Dawn is capable of.  Sure it’s pretty short and sweet, but each of the songs have their own flavor to them and fans aren’t going to grow tired of them anytime soon.  A solid helping of brutal and memorable extreme metal.