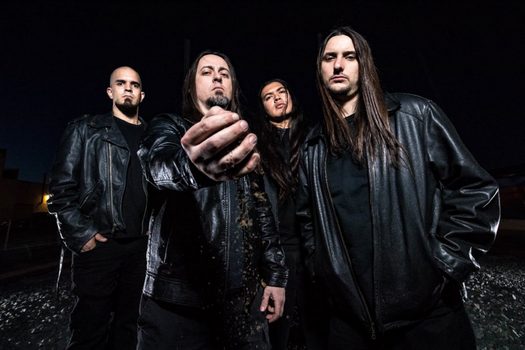 It’s been a while since new Abysmal Dawn came through the pipes. 2014 was when Obsolescence was released to the masses. So it’s been six years, but Abysmal Dawn is back with their latest offering in the form of the recently released Phylogenesis. An album that sees them continue to hone their skills and provide a death metal experience that is second to none. We talked with mainman Charles Elliot just prior to the album’s release to get an idea of what they’ve been up to, artwork consistencies, and what he is particular of proud of accomplishing with the band.

Dead Rhetoric: I know you were on the road recently, but what else has Abysmal Dawn been up to since 2014?

Charles Elliot: We did a lot of tours for Obsolescence. I think we did 4-5 US tours, a European tour, and a quick run of South America. So we were busy. We also had some line-up changes, so we needed to work that out. Then we started writing on a record in about 2016. We went into the studio to record drums and rhythm guitars in November or December of 2017. From there, we didn’t have lyrics, leads, or bass lines written – and at the same time, things in life got in the way and put a hold on things. That brings us up to date, I guess [laughs].

Dead Rhetoric: What impact do you feel the line-up changes had on the new material?

Elliot: I just think we were able to do some things outside of the box this time. I feel like our rhythm section is a bit stronger on this one; no offense to our previous drummer or anything like that. We are just trying different things and exploring different aspects of our sound with the influence that James [Coppolino] has. I think having Vito [Petroni] was a good addition, because we have someone who is specifically a lead guitarist. I always kind of wanted someone to fulfill that role, because I do a lot within the band already. I do most of the writing, the leads, recording, producing, vocals, writing lyrics, and all that shit – it gets a little old [laughs]. Having someone who is specifically dedicated to lead guitar was a big weight off my shoulders.

Dead Rhetoric: I know you said you were keeping busy, but do you feel that longer time between albums was helpful for Abysmal Dawn?

Elliot: I feel like we couldn’t have written this record if we had started right away, in 2015 or so. I think it needed to breathe a bit and have some distance from the last album. We are the type of band that doesn’t really like putting out records unless there is some sort of progression from our previous work in some way. Taking that time and fleshing the songs out, and waiting to be inspired, instead of forcing it to come out definitely helped. I don’t know – you can’t really force the artistic process with us. Maybe that’s a blessing and curse. But it is what it is, and I think the album came out the best it could in the end.

Dead Rhetoric: What are you most proud of when you look at Phylogenesis?

Elliot: I just feel like it’s a progression from us in musicianship and songwriting. I feel like we pushed ourselves more. The songs feel stronger to me. I feel like I’m doing a lot more vocally, and musician-wise I feel like we stepped it up. I feel like James is a drummer’s drummer and Vito is a shred guitar player. Eliseo [Garcia] brought a lot more riffs this time, and worked on his bass lines a lot more – he’s locked into what James is doing.

Lyrically, I’m proud of the record and worked out a lot of demons myself in doing this record. It was a cool experience for me, because it’s the first album of ours that I’ve really mixed and produced. I was proud of that as well. I’m proud that we held the fucking band together and put out another album, to be honest [laughs]. I feel like this is the best we’ve done so far, and I think we can do even better in the future.

Dead Rhetoric: Do you feel it’s tougher to keep a line-up together the longer you go on for, with this type of music?

Elliot: I guess. Time is hard on everyone I think. Any sort of relationship you have with people – whether it’s your wife, your girlfriend, your friend that you have known for years. People can grow apart. I feel strongly about our current line-up, and being friends to start with. It’s easier to keep a line-up together when you are doing it for the right reasons and aren’t just business partners. Right now – it feels strong, and I feel like everyone is able to communicate and have a good understanding of what we want. We are all on the same page. I hope that it stays like this, but you never know what time will tell us.

Dead Rhetoric: I know that artwork is important to the band – anything specific you can go into with Phylogenesis?

Elliot: We have worked with Pär [Olofsson] since our first album. With each cover, we have incorporated something from the previous cover. From Program to Consume on, we tried to actually have a continuation of the story, with each cover. This one is the inside of the monolith tower from Obsolescence; I don’t know if that’s supposed to be obvious to anyone but that was the idea behind it. The cover shows the progression, or evolution, of the creatures that have been on the past three covers. That also comes in with the album title – that can be tied into the progression of the band. We are on the negative side of things – the devolution of our society and things like that.

Dead Rhetoric: The black circle that is on each one, that’s meant to be a constant thing right?

Elliot: Yeah, it wasn’t done on purpose to be honest. On our first demo, we had a picture of an eclipse – it was a photograph. I don’t know if that ties into anything exactly [laughs] – maybe we were thinking Abysmal Dawn…eclipse? But it’s not a dawn [laughs]. But somehow, it tied in or it gave me an apocalyptic vibe, that image of the eclipse. I don’t remember if Pär just incorporated it on the first cover or if I told him to incorporate it based on our demo, or in following the lyrics of “Blacken the Sky.” I think that was the inspiration behind the cover of From Ashes. From there, Program to Consume I think Pär just ended up putting the black hole eclipse on there. From then on, it just became tradition. We’ve incorporated it and other elements from previous covers into the next cover for each new album.

Dead Rhetoric: What do you feel is most important when it comes to Abysmal Dawn’s songwriting?

Elliot: I guess for me, I want to have songs that people can remember, with a bit of technical flair and aggression. We want something to translate well into the live environment. The whole purpose of this music is to be played in front of a live audience. If it doesn’t fit in that context, then it’s not for us. We aren’t throwing out some jam tracks, or long instrumentals. We want to put out stuff for the crowd to interact with, and feed off of their energy and give it back to them. I feel like that is the most important thing for us.

Dead Rhetoric: You’ve been involved in the scene in a multitude of ways outside of just being in a band over the years, what can you speak to about comradery in metal?

Elliot: When you go on tour, I feel like it’s like going off to war with someone for a month. You usually aren’t in the best conditions. Things have gotten better for us as we have gone along, but it’s still hard in different ways. Being in close quarters for a month, you look out for each other and try to get a long as people. All of the good people, and the bands, realize that we are all in this together and look out for one another. I think those are usually the people that last within the industry and this genre. They are in it for the right reasons. They aren’t in it for themselves, it’s a brotherhood. So in that sense, I think there’s a lot of comradery with most bands. Being a musician isn’t easy and touring is tough. It takes its toll on you in different aspects of your life.

Dead Rhetoric: What would you like to see from death metal as we continue forward with the genre?

Elliot: I don’t know – I just play this music because I love it. As far as what I’d like to see…I don’t have any grand plans for the genre. I am just happy that there’s new bands and it has continued throughout the years, and it still draws in young crowds and bands. I feel like it’s a timeless form of artistic expression. There will always be people drawn to this type of music. We have a traditional approach to it, but with modern touches. I am not going to lie, I’m playing what I want to hear. I’m not going to reinvent the wheel, but blowjobs and pizza haven’t been reinvented in years, but you still fucking enjoy it [laughs]. I just think people will always enjoy this type of music. If not, it is what it is. But it has endured a lot over the years.

Dead Rhetoric: What do you feel most accomplished in achieving with Abysmal Dawn?

Elliot: I’m the only original member, and Eliseo has been in the band for a good amount of time. The other two guys are newer, but I feel that I’m glad that I have stuck with it. We’ve grown slowly over the years, and we’ve never been ‘the next hottest thing’ in metal. I’m happy and proud that I have stuck with it, and that it’s grown to a certain level of popularity over the years, and continues to grow. We are staying true to whatever we want to play, and I’m proud of that too.

Dead Rhetoric: What’s planned for the months ahead?

Elliot: We did have some plans for June, but they have been cancelled for obvious reasons. We are trying to play a European tour for hopefully December. If everything goes according to plan. We hope to go out on the road again in the US. But everything is up in the air. No one knows when this is going to clear up, but hopefully we will be out there soon pushing the record.

Until then, we might do a few new songs. There were a few songs that we didn’t have lyrics for, so maybe we’ll release those as an EP or something in the downtime. Maybe we will record some covers or do some playthroughs. I don’t know if we will do an live streaming concerts. We’ll see if people are tired of those by the time we roll around to doing it [laughs]. But I think we wrote a good record, and our fans are patient. We were able to do this last tour with Vader, Hideous Divinity, and Vitriol right before all of this stuff hit. We were lucky on that. The fans are still there. I’m really proud of that too – how loyal our fans have been and how patient they are. They aren’t fleeting metal fans. They like what they like and they stick with it for a long time, and I’m proud of that.