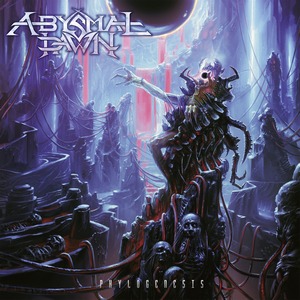 Some bands can manage to skate by a longer time frame and come out unscathed. Abysmal Dawn has had 6 years between Obsolescence and the soon to be released Phylogenesis, but with continued touring, it’s quite clear that they haven’t lost their edge. If anything, Phylogenesis shows that the band is continuing to sharpen it with age.

While they may not be touted in the same sentence as say, Cannibal Corpse or Suffocation, Abysmal Dawn have been remarkably consistent players in the death metal world for most of this current century. Much like the two bands mentioned above, what separates Abysmal Dawn from much of the current crop of death metal bands is their ability to write for the song instead of just going for the uber-brutal or super-technical riff. Phylogenesis continues the band’s ability to write memorable songs, and that’s the true bottom line. That said, there’s plenty of the other death metal ‘goods’ to enjoy. The band can draw a fine line with the technical stuff – making it usable and memorable. “The Path of The Totalitarian” can accelerate into a flurry of fancy riffage, but it’s more grounded in their ability to switch up tempos and showcases a controlled sense of showmanship (particularly around the song’s midsection). There’s grooves to be found too, such as the absolute stomper entitled “Soul-Sick Nation,” that will get you head-bobbing before you know it. Lastly, the brutality is still ever-present, whether it’s in a mid-tempo crushing moments (complete with some melodies) in “Hedonistic” or in the explosive “True to the Blind.”

Not really much of a way to describe Abysmal Dawn without mentioning that they have the complete death metal package. They can bring in technical stuff, melodies, groove, and keep it super-heavy without ever going too far in any direction. In short, Phylogenesis should give death metal fans exactly what they are craving.