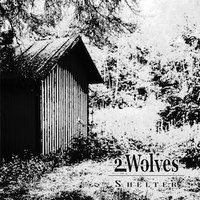 Any sentence with the words “Finnish” and “mournful” should get the ‘ole ears-a-perking up. The starting point for this, as you should know, is Sentenced, a band who took its brash, somewhat reckless death metal beginnings and morphed into a finely-tuned commercialized, melodic, suicide metal machine. In turn, Sentenced provided the Finnish metal scene with years’ worth of material to work from, something Helsinki’s 2 Wolves don’t shy away from on their third album, Shelter.

Probably a name not tossed around these parts much, but Sinamore, a one-time Finnish Goth metal upstart on Napalm Records, are the first band that comes to mind when placing 2 Wolves’ style. Both bands employ a hearty clean vocalist, one that while without the drab-and-roll action of Sentenced’s Ville Laihala, can find enough melodic comfort to make things work. Case in point, the chorus of “Surrounding Fields and Stars in the Sky,” where a formidable twin guitar melody is buffered by vocals that don’t cross the commercial line, but have enough Gothic caress to satisfy would-be suitors. A similar thread runs though “Star Collection,” and perhaps even more in particular, “Serpentine Paths in the Autumn Night.”

Because Shelter doesn’t possess the slick-for-slickness sake production job of the albums that came before it, there’s a lot to suggest 2 Wolves aren’t quite yet a fully-realized entity. While these songs are hardly half-baked in nature, they’re not quite at the level of the bands they’re striving for. However, time is generally kind to Finnish bands who stick with their craft and are in it for the long haul. With three albums under the belts in four years, 2 Wolves may factor into the Finnish metal equation eventually.