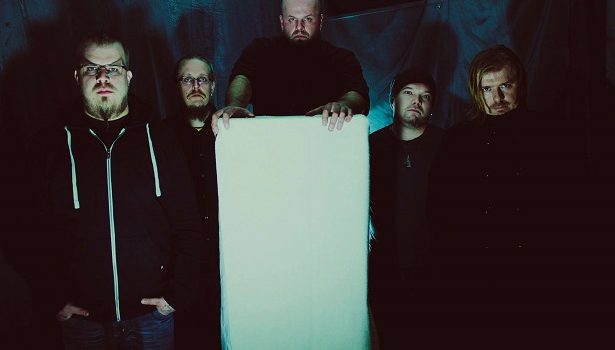 April showers bring May flowers, a line surely plenty of us were uttering throughout the month as rain foiled plans and soaked the earth. All the more reason to stay inside and listen to metal, though, which is another excuse to pull together Rapid Fires, our monthly short review column. Now that the year is in full swing, there’s plenty to absorb, digest and eventually spew out, which is what we did for 2 Wolves, Aera, Hedonihil, Irisis, Lightfold, Eli Litwin, Metall, Oceanwake (pictured above), Origin, Tel, Vesssna, Visigoth, and Wounds. 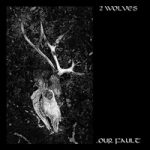 2 Wolves – …Our Fault (Inverse Records)
On their fourth full-length …Our Fault Finnish gothic doom metal band 2 Wolves keep the balance between melodic riffs and dual clean/growled screams for vocals – enticing the listener in a way that keeps both audiences satisfied. The Finnish melancholy seeps through (Sentenced and Wolfheart noticeably), as does influences from Paradise Lost to My Dying Bride – making “Unwritten Names” and “Departures and Arrivals” delightful in that dark, dreary atmosphere where the band can be introspective one moment, then savage and devastating in a melodic death/groove manner the next measure. Membership changes and touring made for a five-year gap between records – but 2 Wolves probably achieved their most consistent, cohesive, and catchiest record to date. Per capita one of the strongest metal countries going – with no signs of wavering in that regard. – Matt Coe (2 Wolves on Facebook) 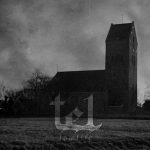 Aera – The Craving Within (De Tenebrarum Principio)
Aera, a Norwegian-Swedish comprised of vocalist Stein Akslen and multi-instrumentalist Ulf Kveldulfsson, plays the sort of black metal that harkens back to a time that will probably never be recaptured, meaning, the early 1990s. Lo and behold, The Craving Within (the band’s first proper full-length) boasts a legitimate production job, recalling a time when their Norwegian forebearers were on the clarity up-and-up. On The Craving Within, Aera melds an impressive, oftentimes scathing display of pure black metal, where tremolo picking, harsh vocals and elongated blast portions rule the roost. Just like the old days. – David E. Gehlke (Aera Bandcamp) 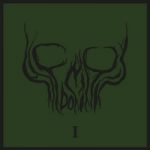 Hedonihil – I (Inverse Records)
What happens when you take members of Swallow the Sun, and instead of focusing on gloom, you make them tackle misanthropy instead? Hedonihil is the result, and it’s anything but sullen. A dark and nasty combination of death and black metal done with full hatred coming through the instrumentation and vocals is what you are in store for. Blast beats a plenty, spiteful rasps, and a blitzkrieg of riffs give the album an immediate caustic sensation. It’s clearly a bit more one-note than the members’ main band, but the visceral nature makes it good for a spin once in a while after a long day where you need a little music that’s ready to burn the world in audio form. – Kyle McGinn (Hedonihil on Facebook) 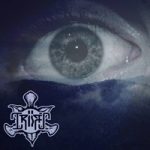 Irisis – Equinox Requiem (Self-Released)
Progressive thrash from France, Irisis serve up their debut EP Equinox Requiem at a name your price point through Bandcamp. Smart thinking to get in on the ground floor, as these four musicians know their way around their instruments – executing the material in a forward-thinking aural collage of shapes and sizes. Calm nature scenes and tranquil opening guitar lines for “Uroboric Supraflorescence” soon subside into progressive/jagged riffs, pummeling tempo changes, and speedy word spew. Over the four songs and 25 minutes of musical content, it’s obvious the band contains a wide array of influences (Megadeth, Vektor, and Coroner on one side – Voivod, Death, and even alternative music on the other). Kudos to the stellar bass action from Quentin Royer, as Irisis won’t remain in the underground for long if the quality songwriting and propulsive musicianship keeps going from this fine first foray. – Matt Coe (Irisis on Facebook) 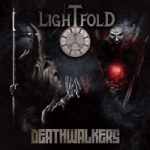 Lightfold – Deathwalkers (Pitch Black Records)
Five years beyond their debut, Lightfold put forth Deathwalkers – a concept album that explores the layers of life, death, and pain. This Greek band sit in a power/progressive metal template with symphonic/orchestration nuances – haunting female choirs and tasteful keyboards come up against the propulsive percussion work and exciting lead guitar breaks. The mood can change from serenity to explosive from one measure to the next – Dream Theater an easily spotted influence during the opening keyboard/guitar measures for “Behind the Veil” while the power aspects come up for the double bass-driven “Demon Upon Me”. At 13 tracks and 63 minutes there’s plenty to absorb – however the basic, nondescript mid-range delivery of main vocalist Martin Deathwalker lessens the musical impact, as he just can’t carry a lot of these progressive arrangements with the power and prestige necessary to elevate the proceedings. File this under potential unfulfilled. – Matt Coe (Lightfold on Facebook) 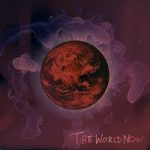 Eli Litwin – The World Now (Self-Released)
Eli Litwin, known for more technical acts like John Frum and Knife the Glitter (among other things), brings forth a more varied solo release with The World Now. A hybrid of acoustic and electric sounds, it takes quite a bit of ground in only five tracks. Each song has a unique feel to it, and features some jagged and blunt rhetoric about the world we live in today. Moments of scathing rage and melancholy aren’t afraid to share time (see “Rising Tides”), and it still retains a certain metallic heaviness (both sonically and with attitude) even with such a large electronic component. It may not strike everyone’s fancy, but it’s an interesting release that clearly comes straight from the heart. – Kyle McGinn (Eli Litwin on Facebook) 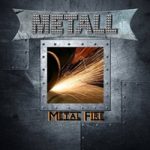 Metall – Metal Fire (Iron Shield Records)
Another 80’s German metal band resurrecting in 2013, Metall release their second album Metal Fire – and it’s clear that this is pure traditional songwriting based on titles alone such as “Metal for You” and “Metal Maniacs”. The riffing and double kick propensities bring Manowar and Grave Digger to mind – while the off-kilter shrieks and unison background vocal support hit all the cliché buttons. The struggle to fully embrace the material comes down to ability – be it painfully playing behind the verses drum-wise on “What Is Real” or the wild mid-range to high/raspy melodies against whammy bar lead break shenanigans for “Beneath My Mind”, it’s not very exciting to make the grade out of most rehearsal room activities. Would have struggled to gain a cursory glance three decades ago, lost in the shadows now. – Matt Coe (Metall official website) 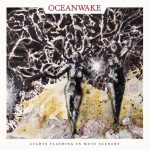 Oceanwake – Lights Flashing in Mute Scenery (Lifeforce)
A deep dive into Finnish doom with post-metal takes, Oceanwake, on paper, would appear to be a one-size-fits-all band, lapping up the sorrow tinges of My Dying Bride with the monolithic fury of Isis. You’ll feel it in spots — opener “Radiant Nightbreak” is the necessitated climatic bruiser, while “Travelogue” pulls in tribal beats for the album’s midway breather. On the flipside, Oceanwake doesn’t do any one thing better than the other, which causes some of these tunes to peel off faster than they should, but, of course, the whole thing is darker than a Finnish winter…which is pretty dark. – David E. Gehlke (Oceanwake Bandcamp) 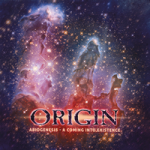 Origin – Abiogenesis: A Coming Into Existence (Agonia Records)
Abiogenesis takes material from Origin’s origin – the period of 1991 to 1996, and releases them to the public, along with the band’s 1998 EP (remastered for this release). The first 8 tracks where recorded by Paul Ryan in the last 5 years (he handles all instrumental duties) and is a recreation of said tracks. It’s an interesting set of tracks, especially to hear the beginnings of Origin and then compare it to what the band is doing nowadays. While it might not attract many new followers, it’s one that’s near mandatory for fans who are curious to hear the band’s beginnings. Well worth it for the heavy metal collector. – Kyle McGinn (Origin on Facebook)

Tel – Lowlife (Aural Music)
Sludge-y doom here, this time with a depressive atmosphere, instantly perking up this scribe’s ears. Generally speaking, this style can get stuck in the mud then spin its wheels like no other, which is why Richmond’s Tel deserves some kudos for trying to do something at least mildly fresh. On their Lowlife debut, the band heaves the usual assortment of big, burly-man riffs, but underneath it all stalks some mournful moments that tip the scale in their favor, not to mention vocalist Dante DuVall can actually sing…something he should do more of. – David E. Gehlke (Tel Facebook) 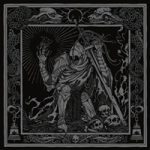 Visigoth – Bells of Awakening (Metal Blade Records)
Honoring the vinyl medium and also putting out fresh material to prepare for a European summer tour onslaught, Bells of Awakening gives the listeners two songs of Visigoth in their straightforward heavy metal glory. “Fireseeker” takes on more of a 80’s US stance in terms of the riffing and aggressive finesse, while “Abysswalker” contains twin exotic harmonies and a mighty chorus appropriate for the band’s NWOBHM/Teutonic nuances. Jake Rogers is truly one of the best true power singers going in metal today – conviction, strength, and personality exude from his every word and melody, in all ranges. Don the leather, grab your metal vest, and get ready to add these songs to your preferred playlist until the next full-length hits the streets. -Matt Coe (Visigoth on Facebook) 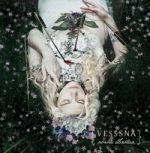 Vesssna – Just About Saintlike (Self-Released)
Russian act Vesssna’s first full-length, Just About Saintlike, leans towards the progressive and gothic side of the spectrum. A blend of melancholy and catchy riffs make up the backbone of the band’s sound, but the problem lies in the vocal area. Not the vocals themselves, but rather the emphasis on them. The vocals are front and center, leaving the music (which is quite interesting) on the backburner at most moments, and it takes away from some of the heaviness it might otherwise have at times. With more balance, the band could be onto something, but Just About Saintlike ends up lacking energy because of this. – Kyle McGinn (Vesssna on Facebook) 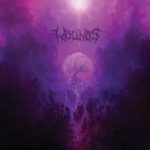 Wounds – Light Eater (Everlasting Spew)
Some good ole technical death metal that comes out with plenty of aggression is at hand with Light Eater. Wounds never really goes too far overboard with the tech side of things, instead amping up the brutality (and the occasional melody – see “Metamorphosis”) to give the EP some bite alongside the intricacy. As such, the EP doles out energy in force throughout the 20-minute runtime. An enjoyable debut that holds promise in that they already have the chops needed to thrust themselves upward in the scene, whetting the appetites of anyone who checks this one out. – Kyle McGinn (Wounds on Facebook)