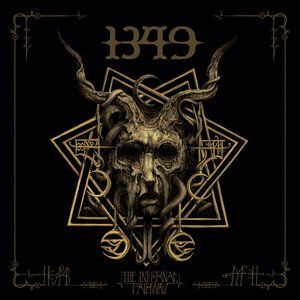 While Massive Cauldron of Chaos was a solid album, the decision to dress that album in a white cover, while no doubt an act of some internalized rebellion against expectations, was nevertheless off-putting. Yes, I’ll be the first to admit that’s an asinine reason to avoid regular engagement with an album.

Fortunately with The Infernal Pathway, the band’s escapades in hellfire are again draped in suffocating black. Hail hellfire!

And like something derived from barbwire-laced dreams, the thrash-flavored and no frills, no-prisoners assault 1349 offers rampages with barely a sideways glance. There is ample melody employed across the album’s expanse and there are three “Temple of Set” interludes interspersed throughout The Infernal Pathway but make no mistake – the album is here for your blood. The album is lean, angry, and likely in being true to spiritual inclinations, burns white hot.

No time is wasted with opener “abyssos Antithesis”, a series of breakneck riffs on riffs on riffs, propelled by drummer Frost’s endless fury. Early release (EPs, at that) singles “Through Eyes Of Stone” and “Dødskamp” return and lose none of their fire. The affair is closed out in an elaborate, almost heavy metal fashion with “Stand Tall In Fire”, a grand gesture to send the album into the void.

No post, no nods to shoegaze, nor are there any aspirations toward the lush. The Infernal Pathway is a taught, serrated blade of an album existing only to relish in bloodletting. The path is long and fraught with despair and 1349 is here to show us the way.