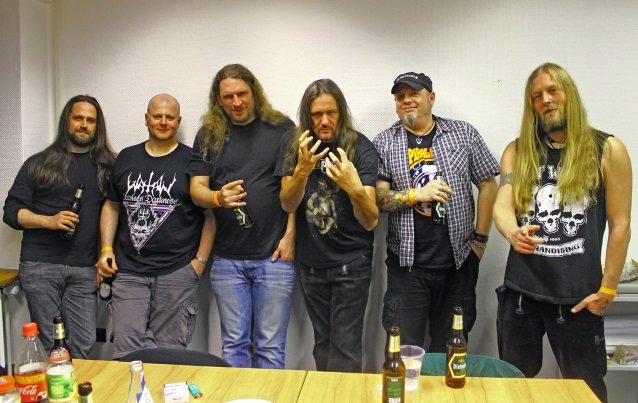 Comments Steamhammer A&R representative Georg Schröder: “It was more than logical that the new ONKEL TOM album will be released via Steamhammer.

“Tom is already an integral part of our roster with his thrash metal band SODOM and we are pretty sure that we can push ONKEL TOM to the next level together.

“The upcoming new album called H.E.L.D. is without any doubt one of the best German-language rock/metal albums of the year. It’s authentic, musically and lyrically sophisticated and, last but not least, it’s the perfect soundtrack for your next rock ‘n’ roll party.”

Adds Tom: “Steamhammer/SPV have been our record company for SODOM from the start, and I’m really pleased that we’ll also be working together on the ONKEL TOM stuff.

“Structures at SPV have changed for the better, with the result that they’ve had increased success promoting and selling more and more German-language music in recent years.

“I’m confident that ONKEL TOM is in good hands and that we’ll get the opportunity to present our music to a wider audience at last.

“The new album is in the can, and what can I say? A whole load of first-rate metal/punk and rock songs have been recorded, peppered with moving lyrics full of anarchy and anger, but also full of lust for life and irony. And, of course, full beer glasses. Production, songwriting and arrangements went hand in hand; everything fits together. For me personally, it’s the most diverse and musically accomplished album of our career to date. This diversity is owed, not least, to the different characters of our band members and the bands they come from. Each of us has been involved in the creative process, the writing of the lyrics and the overall concept. We wrote whatever came into our heads, without any outside influences, so the result sounds thoroughly autonomous and will definitely set us apart from other acts.”