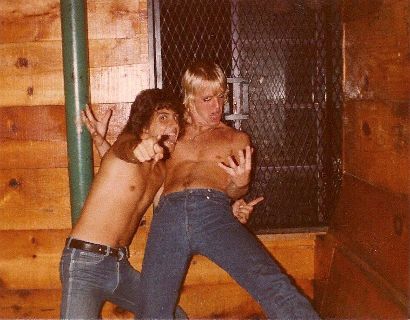 On-again, off-again SLAYER drummer Dave Lombardo has issued a statement regarding the passing of guitarist Jeff Hanneman. Hanneman passed away on May 2 due to liver failure.

“This picture was taken at the Troubadour in Hollywood around 1982. Jeff was the guy that shaved his head and shared the music he was so inspired by. I enjoyed DEAD KENNEDY’S, CIRCLE JERKS, BLACK FLAG and THE GERMS with him. My drumming was getting faster and Jeff was writing original songs with a punk attitude. The fusion of heavy metal and punk took over Slayer’s early mediocre style, hence a new force was born. Thank you Jeff for your inspiring discovery of punk rock that has continued to shape my personal drumming style.”

Hanneman had actually not been playing with SLAYER for more than two years since he contracted necrotizing fasciitis, also known as flesh-eating disease, from a spider bite in his backyard in January 2011. The infection ravaged the flesh and tissues of Hanneman’s arm, leading to numerous surgeries, skin grafts and intense periods of rehab that forced him into semi-retirement and left him near death at several points.

Hanneman’s last appearance with SLAYER was in April 2011, when he played an encore with the band at the “Big Four” concert in Indio, California.