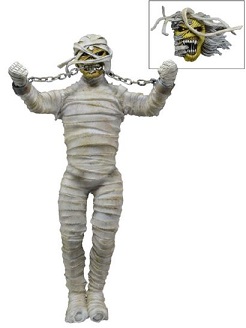 According to Action Figure Fury, with Halloween on the horizon in six months, NECA has released the details for an IRON MAIDEN retro-cloth figure.

The Mummy Eddy, was created in celebration of the 30th anniversary of the classic metal masterpiece –  IRON MAIDEN’s Powerslave. This eight-inch tall Eddie features a real metal chain that can be connected to the mouth or unhooked for when he breaks free. Mummy Eddie is also going to be coming with an alternate, unwrapped head sculpt that really shows the true beast hiding underneath the bandages.

NECA’s new retro-cloth horror figures will be arriving in stores this September for around $30 US.