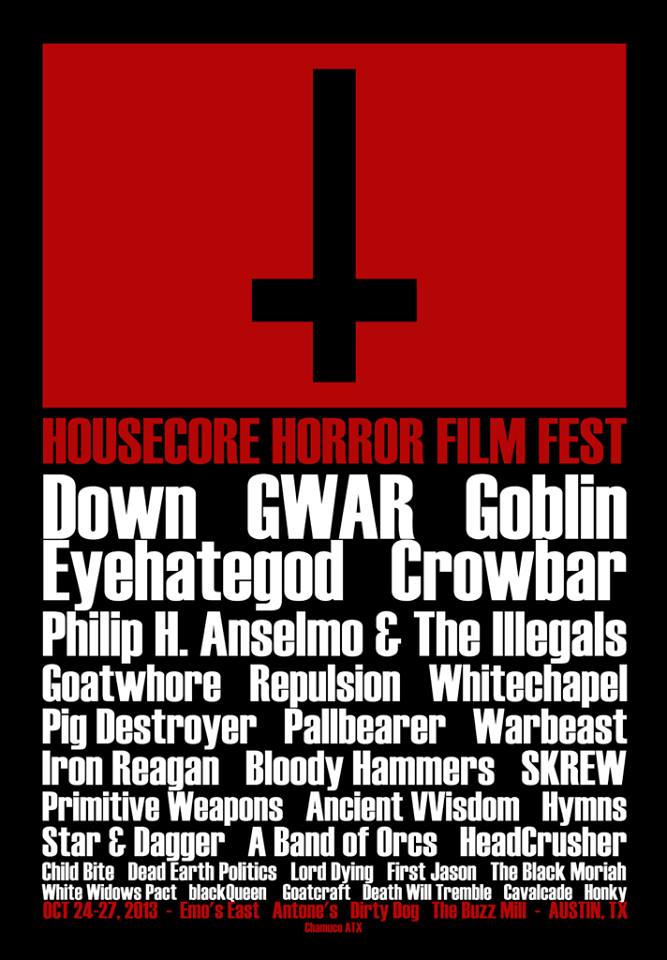 Today, the highly anticipated lineup for Philip Anselmo’s Housecore Horror Film Festival has been released and the first-time festival features loads of heavy music. Among the killer lineup to play the three day fest on October 24-27 include DOWN, EYEHATEGOD, GOATWHORE, GWAR, PIG DESTROYER, GOBLIN, CROWBAR, Philip Anselmo’s solo act and THE ILLEGALS to name a few. A simplistic flyer has also been revealed and is available below.

The ex-SUPERJOINT RITUAL, PANTERA frontman has issued the following statement: “For a cat like myself, bringing in all of these killer bands to play the Housecore Horror Film Festival is nothing but pure pleasure. I’d like to thank all of the bands from all over the globe that are on the bill. I feel like we’ve compiled an extremely versatile line-up of established acts, as well as some killer up-and-comers. I’d also like to give a huge ‘thumbs-up’ to all of the Austin, Texas bands that will be a huge part of this crazy event, because it seems these bands fly way too far below the radar. As for what bands I’m most excited about? I don’t need to call out specific bands…just look at the list yourself and get pumped! I hope everyone who plans on attending the Housecore Horror Film Festival is digging on the band line-ups, as well as the films, like I am. Let’s have a blast!”