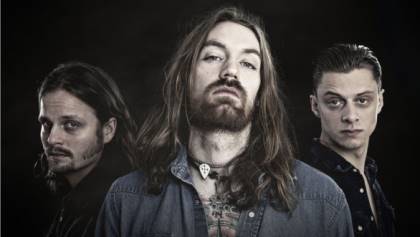 Napalm Records/Spinning Goblin has announced the signing of the Danish heavy stoner blues band PET THE PREACHER. The group’s sophomore album, The Cave And The Sunlight, will be released at the end of April and will be celebrated with an CD-release show at Desertfest in Berlin, Germany.

Comments PET THE PREACHER vocalist/guitarist Christian Hede Madsen: “We are beyond excited to officially announce our signing to Napalm Records/Spinning Goblin.

“PET THE PREACHER is a band that strives to be something special, and by our collaboration with Napalm Records, we are given the opportunity to prove that we are a force to be reckoned with and that we are not giving up… Ever.”

The official video for the new PET THE PREACHER song “Let Your Dragon Fly”, taken from The Cave And The Sunlight, can be seen below.

PET THE PREACHER’s 2013 double-EP, Papa Zen and Meet the Creature, and 2012’s The Banjo full-length debut (save for Meet The Creature when it was initially released in 2011), came out on Bilocation Records.