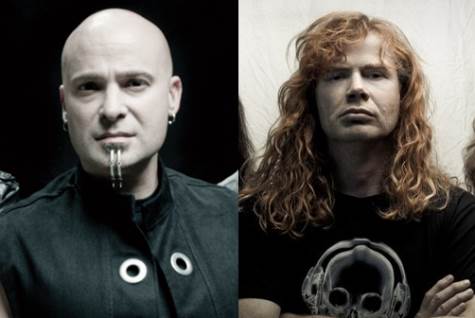 DISTURBED/DEVICE frontman David Draiman contributed “vocal/singing help” on two tracks that will appear on the new MEGADETH album, “Super Collider”: “Forget To Remember” and “Dance In The Rain”. In addition,Draiman makes a guest appearance on the latter song, with Mustaine stating about the track, “It sounds amazing!”

Draiman recently stated about his collaboration with MEGADETH: “I had the distinct honor and privilege of working with the legendary Mr. Dave Mustaine on a few songs for the new MEGADETH record.”

In an interview with the “Shockwaves”/“HardRadio” podcast, Mustaine stated about how the “Dance In The Rain” song came together: “When I first started MEGADETH, I’d come back from New York [after getting fired from METALLICA], and I was pretty pissed and I didn’t know if I wanted to keep playing music, I didn’t know if I could, I didn’t know if I should, but something inside of me was driving me. Later I identified it as revenge, but at the time, I thought it was just anger. And there was a guy that met when I first put together the band. Whether it was called MEGADETH in the beginning or not has no relevance; the band, I started it when I first came back. That was the beginning of MEGADETH. I met this guy, this nutty guy named Robbie… I don’t know what his last name was. So anyway… He was playing these really weird chords that I used in the song ‘Looking Down The Cross’. And I was always really interested in those chords. And I was kind of goofing around a little bit and came up with the progression that ended up being the embodiment of the verses for ‘Dance In The Rain’. And the funny thing about this song was I had asked David Draiman from DISTURBED.. We did some tour dates together and an opportunity came up for us to kind of collaborate on some stuff. And he came out and we kind of goofed around a little bit. We didn’t really end up doing a lot of stuff together, but there’s a couple of little tidbits of ideas that he gave me that we’re using on this record. We’d gone out to Pei Wei to go have lunch. We were done with our stuff and he [went] back to the airport. I’ve got a really bad sweet tooth, so I grabbed a fistful of fortune cookies. I grabbed a fortune cookie and I threw the fortune down, I grabbed another one, and I threw the fortune down. And I picked them up in the reverse order that I opened them [in]. This was really important, ’cause the one I picked up first was actually the second one I opened, and that one said, ‘Learn to dance in the rain instead of waiting for the sun.’ Something like that. And the first one said, ‘An unexpected random gift is coming to you immediately.’ So if I would have opened it right, it would have said, ‘An unexpected gift is coming to you. Learn to dance in the rain instead of waiting for the sun.’ And I was, like, ‘Oh my God! That is so cool.’ I don’t believe in luck and all that stuff — I believe things happen for a reason — but I’ve gotta tell you, man [laughs] — I sure believe in that fortune cookie.”

“Super Collider” is scheduled for a June 4 release via Mustaine‘s new label, Tradecraft, which is distributed by Universal Music Enterprises(UMe). Horn player Bob Findley — who previously appeared on the track “Silent Scorn” from MEGADETH‘s 2001 CD, “The World Needs A Hero” — is a featured guest on the song “A House Divided” on the new album. Other tracks set to appear on the effort include “The Blackest Crow”, “Super Collider”, “Burn” and “King Maker”.

“Super Collider” is MEGADETH‘s first release since its recent split with Roadrunner Records.