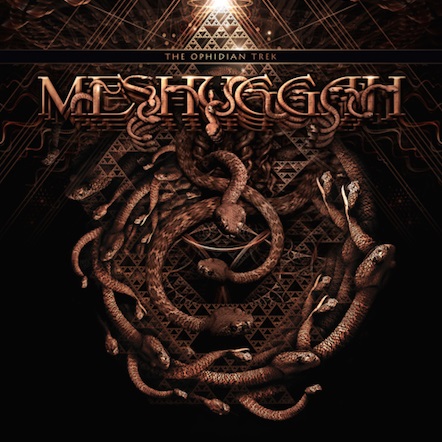 MESHUGGAH will release a concert DVD/2CD set and Blu-ray, The Ophidian Trek, this fall through Nuclear Blast to commemorate the band’s 25th anniversary. With visual footage shot in the U.S. and Europe during “The Ophidian Trek” tour and festival footage from Wacken Open Air 2013 in Germany, the live audio was processed and edited by MESHUGGAH guitarist Fredrik Thordendal, mixed by Daniel Begstrand (DIMMU BORGIR, BEHEMOTH) and mastered by Mats “Limpan” Lindfors (ROXETTE, OPETH, MANDO DIAO).

Comments MESHUGGAH drummer Tomas Haake: “We’re really stoked about this new MESHUGGAH live DVD! It’s been four years since the release of Alive, and with the band celebrating 25 years, we felt that we just had to get another one of these puppies out there!

“Audio/video was recorded during our European stretch of ‘The Ophidian Trek’ tour, as well as at the Wacken Open Air festival — and we’re super proud of how it came out!

“For this one, we used the extremely talented photographer Anthony Dubois for filming and editing, etc., and he’s really done a stunning job with it! Hope you guys dig it, and here’s to another 25!! (or maybe just a little less;-) )”