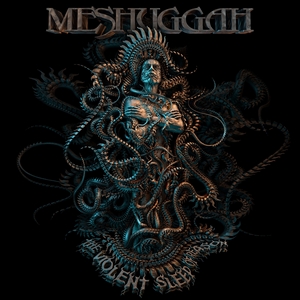 There was a time when Meshuggah would release an album and it would be an event. The band that purveyed a futuristic, polyrhythm-driven churning sound had a genuine feeling of inventiveness with classics with None, Destroy Erase Improve, and Chaosphere ushered loads of excitement with each new adventure (for many, they still do). But as the band has continued forward, it’s seem to become a more mechanical affair than an emotive one – a disorienting blur of complex riffs that meander far longer than they should. The Violent Sleep of Reason continues this pattern forward.

It’s not to say that The Violent Sleep of Reason is without its charms. Lead-off track “Born in Dissonance” might be one of the stronger tracks the band has written in quite some time, feeling like a Meshuggah “classic” with its molding of polyrythmic groove and hard-hitting riffs. Opener “Clockworks” also has a similar vibe, with frontman Jens Kidman carrying his usual throaty bark around some monster riffs. Of couse, Fredrik Thordendal’s soloing continues to be out of this world (and the band’s shining beacon), with uniquely styled passages and an atmosphere that simply cannot be duplicated despite how often it has been imitated. But to call the remainder of the album Koloss Part II seems a fitting analogy. The riffs, rhythms, and grooves – complete with the usual pacing, are what Meshuggah has been pushing forward ever since Nothing and Catch 33. Far too often, the band seems to rely on that same mid-tempo pacing that never really lumbers, but it never accelerates or energizes either (see “Stifled” or “By the Ton”).

Despite the live, in-the-studio recording, one can’t help but feel that the usual cold and mechanical aspect to their most recent output is still very much present. Technically dazzling? Without question. But to really sit down and get into the music on a level other than technique makes the album more of a chore to listen to than it should be. Meshuggah has rightly earned a spot in the metal hall of fame for their past works, but The Violent Sleep of Reason continues the trend of Meshuggah releases that have a few strong songs surrounded by filler.