LAMB OF GOD Issues Statement On Lead Guitarist Mark Morton: “He Needs To Be With His Family Right Now” 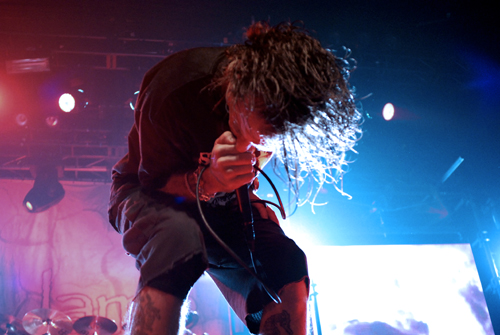 Richmond, Virginia metallers LAMB OF GOD have enlisted the services of BETWEEN THE BURIED AND ME’s guitarist Paul Waggoner, who is filling in for Mark Morton on the band’s European dates.

Says Randy Blythe via his Instagram account: [Paul Waggoner], who plays guitar in the amazing BETWEEN THE BURIED AND ME, will be fulfilling stage-left guitar duty this tour. Regrettably, Mark Morton has to stay at home this run due to a family emergency. LAMB OF GOD has had a pretty rough time with this lately, as both John [Campbell, bass] and one of our crew members (who might as well be band members) had to unexpectedly leave our last tour for the same exact reason.

“Mark is doing just fine, he’s OK, but when these things arise, we have no choice but to cancel tour or get a fill-in. Life happens, as regrettably a lot of my friends have found out recently.

“2014 has started out pretty stressfully for a lot of people I know, but you soldier on and get through it.

“As I stated when John had to split last tour, family absolutely comes first with the members of this band, so when one of us needs to stay at home to be with his family, that’s what happens — no questions asked, we just say, ‘OK, bro, stay home and handle your business,’ and we don’t answer questions by ANYONE about personal family business, so don’t bother asking me why Mark isn’t here — just know that he is OK and needs to be with his family right now.

“No one in this band would cancel a tour if it wasn’t absolutely necessary, and we certainly don’t like touring without all our members, but we are actual human beings with families, not heavy metal robots, so we have real-life families with real-life problems.

“I hope y’all here in Europe, the U.K. and South Africa can understand — we are still coming, we are still going to kick ass and take names.

“Paul totally rips, he’s filled in for Mark before when Mark’s wife was having their kid, so he knew the tunes already — and last night’s show RULED in Austria, despite the fact that I threw so much water all over the place that Paul slipped on the slick stage, did a full-on David Lee Roth split onstage, and BUSTED HIS ASS (it was totally my fault, but DAMN, that shit was funny). So thank you in advance for coming to see us — we are gonna kill it tonight in Milano!”