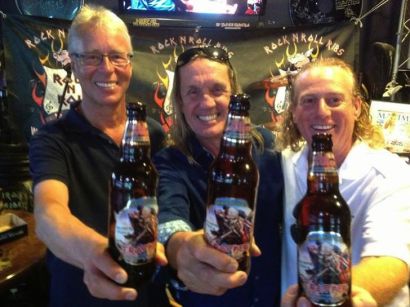 Back in Florida at the end of the European section of the IRON MAIDEN’s Maiden England tour, drummer Nicko McBrain opens the very first bottles of Trooper Ale in the US with his friends Ken Tonkin and Mitch Tanne, at his restaurant Rock N’ Roll Ribs.

If you are in South Florida today (August 13th) drop in and join Nicko and some special guests along with 98.7 The Gator and enjoy Trooper British Premium Beer. More information can be found here.

In July, Robinsons Brewery has announced the production of the one millionth pint of IRON MAIDEN’s Trooper beer, just eight weeks after it was launched.