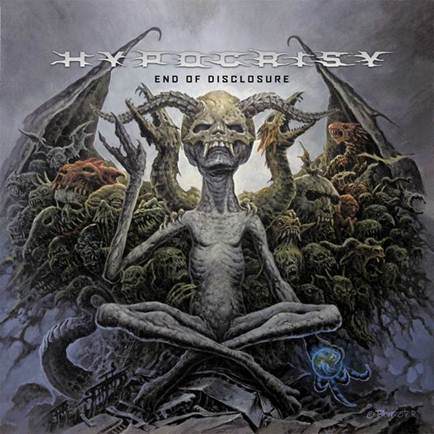 Commented HYPOCRISY mastermind Peter Tägtgren: “WOW! Recognition and thanks to all the metal fans out there! That’s really awesome! We are looking forward to the upcoming shows of our tour, to celebrate a big party with you all! See you there!”

HYPOCRISY has also released a video for the song “Tales Of Thy Spineless”. The clip was shot by Ville Lipiainen (AMORPHIS, NIGHTWISH, THE 69 EYES) during the “End Of Disclosure” release show on March 22 in Stockholm, Sweden.

“End Of Disclosure” was released in Europe on March 22 via Nuclear Blast Records. The CD was produced by Tägtgren at his Abyss Studio in Sweden. The artwork was created by Wes Benscoter (SLAYER, KREATOR, NILE, VADER).

“This time, I wanted to go back to the basics,” said Peter. “[I] felt like we lost it for the last couple of albums. It’s straight to the point. It’s more HYPOCRISY than ever — the fast, the heavy, the epic.”

HYPOCRISY’s latest DVD/CD, “Hell Over Sofia – 20 Years Of Chaos And Confusion”, was released in October 2011 via Nuclear Blast. The disc contains footage of the band’s February 27, 2010 concert at the Blue Box club in Sofia, Bulgaria.

“Tales Of Thy Spineless” video: