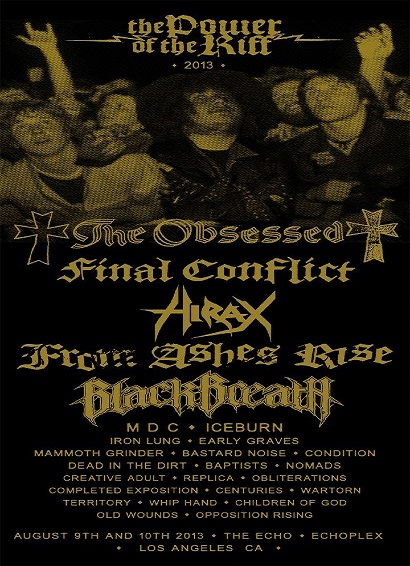 The 2013 installment of the The Power Of The Riff festival in Los Angeles is right around the corner, this being the fourth annual occurrence of the massive event.

Curated and organized by Greg Anderson and Sam James Velde, The Power Of The Riff honors fans and musicians of all ages from within all walks and lifestyles under the umbrella of the heavy music underground. Tapping into a lineup that represents forefathers, milestones and current touring acts, while shedding light on up and coming bands and local acts, The Power Of The Riff festival is an all-day, all-ages event. The festival also includes an on-location record swap-meet of local stores and features pop-up stores by independent record labels and vendors, DJ sets between performances, a gourmet food truck court with some of Los Angeles’ best purveyors of street food dining, and more.

The fourth annual The Power Of The Riff is spreading it’s wings a bit more this time around, this year adding a pre-party on Friday, August 9th at The Echo. The massive full-day lineup the next day, Saturday, August 10th, at both The Echo and Echoplex, offers another stellar lineup of classic heavyweights, and crushing newcomers. The combined events offer 26 bands in total.

Tickets for TPOTR go on sale this Saturday, June 15th; a discounted combined ticket price will be available for both events. For more details visit Thepoweroftheriff.com.