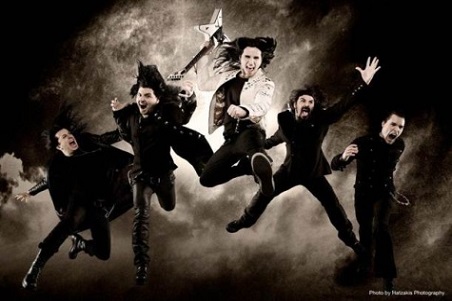 As previously reported, Greek melodic metallers FIREWIND will be commemorating their 10th anniversary through the release of “Apotheosis – Live 2012” on June 24th through Century Media Records. The CD will contain 17 songs recorded at special anniversary shows in Greece and select European shows during their “Few Against Many” tour in 2012. The cover artwork for “Apotheosis – Live 2012“, which will be released as a digipak in its first limited-edition pressing, was designed by FIREWIND’s longtime partner in all design matters, Gustavo Sazes (ARCH ENEMY, ANGRA, DREAM EVIL) based on live photography by Hans-W. Rock. Track listing, artwork and a preview of recorded material for “Apotheosis – Live 2012” is available below.

With their latest effort ending at nearly 70 minutes, it exemplifies the band’s career, effort and decade long progression thus far, which spans over seven studio albums. It also marks FIREWIND’s final release with singer Apollo Papathanasio, who decided to leave the group at the end of last year. FIREWIND recently completed an extensive North American tour with TURISAS and STOLEN BABIES. Kelly Sundown Carpenter stepped in for vocals for the trek in lieu of Papathanasio departure.

When asked if Carpenter is going to be the permanent replacement for Papathanasio, Gus stated: “We don’t know yet. We’re not going to rush that decision. We’re really happy with what he’s doing on stage; he’s doing a really good job. But we have this tour and then we have a few festivals back home and then FIREWIND might be on hiatus for a while, so we’re going to see what we’re going to do.”