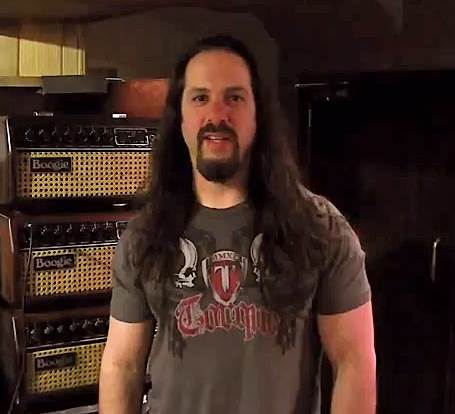 Progressive metal giants DREAM THEATER are in the studio recording the follow-up to their Grammy-nominated album “A Dramatic Turn Of Events”. The band’s guitarist, John Petrucci, sent Mesa a rig video tour of the amps he’s using in the studio for the new CD. A wide assortment of vintage Boogie Mark III, Mark IV and a few prized Mark IIC+ heads from his collection make up the early Boogie usage. Current amps like the Royal Atlantic RA-100, Triaxis/2:90 and the mainstay of John‘s studio and live rig, the Mark V round out the modes, tones, channels and sounds in use on the upcoming effort. John walks Mesa through “Boogie Mountain” in the studio and provides a few details on what amps are used for what sounds where as well as some insights into the DREAM THEATER studio process for guitar sounds overall.

In a recent interview with Roadrunner Records, Petrucci stated about the progress of the songwriting sessions for the band’s new CD: “First of all, it’s been going great with [drummer Mike Mangini, who joined the group in 2010], and as much as we’ve been a band together for about 15 years, we haven’t really experienced that process together. We’ve been in the studio for a few weeks now, and he’s been amazing. Amazing chemistry is great, the writing process and the whole vibe is great, and his role is to let his personality shine as a drummer, creatively and to have his input and his musical personality really come through. And I gotta tell you, it’s happening. When people hear the drumming on this album, they’re gonna be pretty freaked out. On the last album, he did a great job, but he wasn’t there for the writing process and he was interpreting drum parts that I had programmed. Even though he used his creativity, of course, to change them up and do his thing, I feel like now he’s just Mike Mangini unleashed. It’s all him. It’s all his creativity, all his decisions and ideas and man, the guy’s an animal.”

“Live At Luna Park” was filmed over two nights in South America — home to one of DREAM THEATER‘s most ardent fanbases. The DVD was filmed August 19 and August 20, 2012 at Estadio Luna Park in Buenos Aires, Argentina after a 15-month world tour, hitting 35 countries.