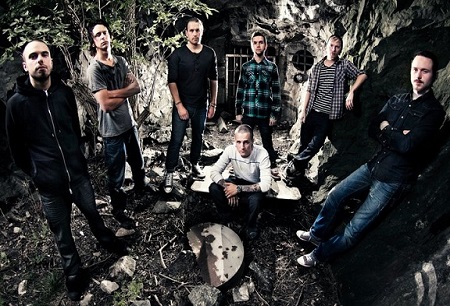 As 2011 gradually fades into oblivion and we head into 2012, the Meshuggah-influenced “djent” (pronounced simply “gent”) movement is gaining steam like nobody’s business. The year has seen a deluge of bands laying claim to this style, most notably After the Burial, Born of Osiris, Periphery, Tesseract, and today’s artist in question, Sweden’s Vildhjarta, each of whom bring something different to the table, yet all retain the same sound characteristics. And if we were to bust out our crystal ball to see how 2012 unfolds, it would likely show that djent was the overriding trend for the year and by then, will be burned out. Better enjoy it while we can.

Having been picked up by Century Media earlier in the year for the release of their Måsstaden debut, the seven-member strong Vildhjarta is hoping to be the Scandinavian djent mainstay, something affable guitarist Calle Thomer was more than glad to discuss with Blistering. Also of note is the band’s sense of humor, including the word “thall,” which is a sort of rallying cry/inside joke within the band. And we sure like jokes…

Blistering.com: The announcement video you released to announce your signing to Century Media is pretty funny. Who put it together?

Calle Thomer: Actually, we were all out of ideas to do for an announcement video because we didn’t want to do a regular video that every band does when they sign a record deal. Then, we found some footage from a Swedish comedy that was on TV a bunch of years ago, and I think it was David [Lindkvist], the drummer, who came up with the idea to put some subtitles on it.

Blistering.com: You formed around 2005 and did some demos until doing the first full-length, so describe to me the journey up until the point you signed with Century Media.

Thomer: It was a really long trip, mostly because it took so long to put the band together and find the sound we were comfortable with. It was Daniel [Bergström], the guitarist, who founded the band through the Internet, through the Meshuggah board [laughs].

Blistering.com: There are seven of you in the band…that has to make for a crowded van and/or bus when on the road.

Blistering.com: How do you guys manage to make the whole three guitar thing work? On the album, it sounds like you divide and conquer the parts pretty evenly.

Blistering.com: The album takes a little while to consume, so tell me how it all came together, for it doesn’t come across like a conventional djent album.

Thomer: We have some material that is about four years old, when Daniel started to write the record. I think we had about 30 songs for the record, so we had stuff before we signed the deal with Century Media. It was about two weeks after the signing; Daniel wrote about 50 or 60% of the record, so there was a lot going on in the last month. It feels like a lot of parts are fresh, but there’s a good balance.

Blistering.com: “Dagger” is one that comes to mind that is like that.

Thomer: Right, and I don’t have a particular favorite. I like every song, and I think all the songs fit together really well, especially some of the instrumental songs…they add to the intensity.

Blistering.com: I read that you’ve incorporated a concept running through the album about a town in Sweden. Can you elaborate upon it?

Thomer: The story, we actually don’t want to reveal too much about the story yet. We like to keep it to ourselves…but you can see it if you can follow the story through each song, and through the artwork as well. It’s told in like a fable manner. Daniel came up with this concept, and the name of the town, so we thought it would be a cool title for the album, because when we were recording, we didn’t even have a title yet. Me, Daniel, and other Daniel [Ädel, vocals] sat down and carved out the concept, so from that, we came up the concept in like an hour.

Blistering.com: A lot of the music had to have come first, so did that lend to making the creation of the concept easier?

Thomer: I don’t think so, each of us had our way in creating the album along with Daniel. But it’s much more interesting that having ten regular songs.

Blistering.com: You make no bones about being a djent band and right now, it’s a very popular form of metal. How long do you think you’ll remain comfortable with this tag?

Thomer: We don’t have a problem with it. The best way to describe our sound would be like Messhugah-riffage, which I see in a lot of heavy metal reviews, and I can see why people label as djent. We’re proud to be part of the scene.

Blistering.com: So, how big of an influence is Meshuggah?

Blistering.com: How did you end up on the Meshuggah board and ended up joining the band, right?

Thomer: I think Daniel wanted some feedback on some of the things he had recorded, and he posted them on the Meshuggah board. I had no idea how the feedback was; I don’t read the old threads [laughs].

Blistering.com: What’s the story behind the word “Thall.” I read it in your bio, and I saw it on some of the videos you have released. Is it some type of secret word between the members of the band?

Thomer: We won’t tell the story behind it because it might lose its meaning, but “Thall” is like a word…a lifestyle, or could have been the title of the album. Stuff like that [laughs]. People keep asking us about it, but it’s just a word, thall. It can be whatever you want it to be.

Blistering.com: Has it made its way onto any t-shirts?

Thomer: Yeah, we had a batch with the word on it. They went out pretty quickly [laughs].

Blistering.com: Wrapping up, what’s on the agenda going into 2012?

Thomer: Actually, right now we don’t have anything set up because Daniel is wrapping up some studies, but I guess next year we’re going to get on the road. Nothing is planned yet, but we are working with Century Media and our booking agent to set up some tours.