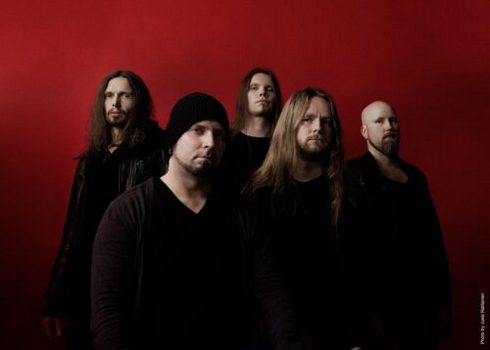 Consistently bringing some of the most gloomy and sorrow-filled musical landscapes to the metal world, Swallow the Sun aren’t a band to sing about happy topics.  But their ability to make riveting and genuinely heartfelt music has always struck a chord with fans in the genre, looking for something that hits a more downtrodden note.  Their eighth album, complete with eight tracks, brings with it misery with some aggressive bursts in a way that carries the band forward.  We spoke with vocalist Mikko Kotamäki to hear his thoughts on the band’s appeal and gloominess, their live atmosphere, and of course, Moonflowers in detail.

Dead Rhetoric: Moonflowers is your eighth album.  What stands out about it to you?

Mikko Kotamäki: It’s nothing new, basically, but it wasn’t really a planned album.  It happened because of all this pandemic shit.  It just sort of happened.  When everything happened last year, the band had just turned 20 and we had those anniversary tours going on, and then we had to cancel everything.  So we had nothing but time on our hands and Juha [Raivio] just showed up with 8 new tracks and said he had an album ready.  So in that sense, it’s a bit different in that it just happened.

Dead Rhetoric: Cammie Gilbert from Oceans of Slumber does guest vocals on “All Hallows’ Grieve?” How did that come about?

Kotamäki: We are good friends and we toured together in Europe a few years ago.  She has an awesome voice, so we thought she would be a perfect fit for the song.  She was very happy to do it.

Dead Rhetoric: You mentioned the spontaneity of the album due to COVID.  Did that change the recording process as well?

Kotamäki: Not so much.  Of course it was more uncertain how things would work out.  We recorded some stuff in Finland and some in Sweden.  The border between them was closed for a long time.  We were not allowed to cross the border so it caused some trouble in that sense.  But in the beginning of the summer when we recorded it, the numbers had gone down and we were allowed to travel.  So it all worked out, but we were prepared to do some Zoom sessions with the producer if we had to.  So we had plans in case things fucked up, but things all worked out.  It was the same old, same old.  The whole COVID thing, I think Finland was pretty lucky with it. We didn’t have the lockdowns or anything like that, so it was a little easier here compared to many other countries.

Dead Rhetoric: Jaani Peuhu is only out for the touring cycle, but is still a part of the band?

Kotamäki: He just did some backing vocals for this album.  All of the keyboards are done by Juha and we had some actual strings on the album too.  But he is not really a part of this album either.  COVID really changed the schedules and then this album wasn’t supposed to happen [laughs], so he had made plans with his other band so it didn’t really work out this time.  It’s a five piece band now, and it’s like that on the album as well.

Dead Rhetoric: Listening to the album as a classical piece, do you hope fans get from the experience of having two versions of it?

Dead Rhetoric: I listened to the album as well as the classical version.  It’s still the same songs, but there is a nice vibe to it.  It was nice to sit and listen to the classical piece while I was getting some work done, then I could fully immerse in the studio version.

Kotamäki: I could see that if you could use the instrumental versions for relaxing and smoking some weed.  The metal versions are a bit of a different story.  This time it’s a bit more aggressive compared to the previous album.

Dead Rhetoric: You also released the 20th anniversary live album a few months back.  What memories do you have looking back at those shows?

Kotamäki: Thinking back then, the world was totally different [laughs].  It makes me wonder if the world will be like that any time soon again.  I remember we only got to play like 10 of those shows and it was really starting to work out.  We were waiting to bring it over to the US, and it really fucked up things.  A band turns 20 only once, and that’s gone now.  But luckily we could film one of the shows so we could put out the dvd.  It is weird to think about it – there have been some weird time, that’s for sure.

Dead Rhetoric: With the live album and having seen the band live a few times, what’s the type of experience you like to cultivate as a live band?

Kotamäki: We are not really party music.  We are maybe not the most energetic live band, but we always like to think that the music speaks for itself.  We don’t need lightning bolts or tanks on the stage, it’s not our thing.  We hope that people actually listen.  We are not a huge mosh pit band either.

Dead Rhetoric: To me, it almost feels like more of an atmosphere and you kind of get everybody into a ‘zone.’  You don’t see a lot of mosh pit stuff, which is nice since everyone is focusing on what you are doing.

Kotamäki: I think so too.  We are not 18 anymore.  We are old geezers nowadays, so when I go to see gigs and concerts I don’t want to get in the middle of a pit.  I want to watch it quietly and enjoy the feeling.  I think that’s way better for me than a huge wall of death and that stuff.  It definitely works with a different kind of music, but we are no grindcore band.

Dead Rhetoric: What do you feel that you’ve learned along the way through 20 years as a band?

Kotamäki: I think that many years in touring live and the music business makes you more cynical [laughs].  It’s cool, it doesn’t have to be rock and rock and mayhem all the time anymore.  I remember some years ago that every tour was a huge party but I don’t really miss it anymore.  It’s nicer to get good sleep and not have a hangover every day on tour.  That’s the grandpa thing that comes after many years of partying and touring.  It’s fine though.  I think younger bands can still do that and enjoy it.  We are too old for that shit [laughs]!

Dead Rhetoric: On the same topic, is darkness and despair something that gets easier to write about with age?

Kotamäki: Definitely!  Our music and topics come from real life [laughs] and the older and angrier you get, it’s easier to write and sing about it.

Dead Rhetoric: For a band that is full of despair, beauty, and gloom, what do you think resonates the most with people?

Kotamäki: I have been thinking about that, but I don’t really know.  I think it’s some kind of honesty.  We have always done this for ourselves, and the way we want to.  It’s not the easiest and most commercial way of making music, because with those songs you don’t get radio play.  But in the end we have been true to ourselves in what we want to do with our music.  In melancholic music, there is something comforting – I don’t know what makes it that way – but it is.

Dead Rhetoric: I think maybe someone sees that someone else is going through it.  Going along with the honesty theme, it’s easier to connect with that way.

Kotamäki: Yeah, maybe.  Like traditional old school Finnish music is pretty melancholic.  The music we were listening to as kids that our parents played, it was completely miserable and melancholic [laughs].  We are doing the same thing, but maybe in a more modern way.

Dead Rhetoric: What are your plans for next year?

Kotamäki: We have shitloads of gigs booked.  But can we play them?  I am really hoping we have good news.  You never know how it is going to be.  Touring in the US is slightly harder for European bands, since we can’t travel and enter the country but let’s hope there is a solution for that.  There’s a lot of tours going on in the US right now, so it’s better than in Europe.  Most tours are happening there next year.  We have plans, but let’s see if we can make it