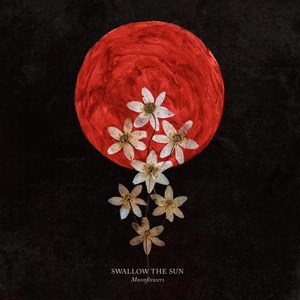 The perpetually gloomy Swallow the Sun have been purveyors of beauty in darkness for quite some time.  As they have gotten more expansive with elements of heavy and quiet, it’s made for some very compelling and depressive listens.  When a Shadow is Forced into the Light saw the band taking a compact yet diverse approach, and Moonflowers follows that concept in turn.  A reflective listen that ebbs and flows that showcases Swallow the Sun’s exceptional ability to play on your emotions.

Moonflowers contains some of Swallow the Sun’s most poignant and moving cuts to date.  It’s nothing out of their usual wheelhouse, but they are given such a polish that it’s easy to be impressed even from such a veteran act.  “This House Has No Home” is inventively thrilling, utilizing harsh blackened blasts and shrieks and contrasting it with some emotive and introspective moments – it’s a stunning finale that reaches some explosive heights.  Particularly after coming straight off of the slow-burner that is “The Fight of Your Life,” which in and of itself rises up from more acoustic and morose feelings into a mix of what can only be described as heavy and full of despair, with just a hint of uplift.  Another standout is the beautiful and sweeping “All Hallow’s Grieve,” which features Cammie Gilbert (Oceans of Slumber) doing some guest vocals, which makes for a haunting pairing as the track moves on.  Add in the dark yet powerful “Enemy” and cinematic vibes of the chilling “Moonflowers Bloom in Misery” and you have a release that really grips the listener from beginning to end.

Swallow the Sun don’t hold back on the darkness with Moonflowers.  But it makes for such a beautiful and immersive listen that you won’t even care as it drags you down into the depths – that shining glimmer of hope that become evident once they bring you down is all you’ll need to rise back up to return to the album again and again.  Gorgeous and gloomy, all at once.