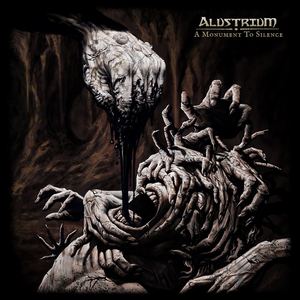 Gaining some buzz a bit later on than other Pennsylvanian acts Rivers of Nihil and Black Crown Initiate, Alustrium made 2015’s A Tunnel to Eden an independent release worth seeking out for those into more progressive extreme acts. Following last year’s EP, the band has signed with Unique Leader Records for their now third full-length in A Monument to Silence. Those looking for melodic goodness in their death metal extremity are bound to find plenty to be happy about with this release.

If extensive and long trips through progressive death are your jam, and you still haven’t managed to find a bit of time for Alustrium, there’s no better time than with A Monument to Silence. It takes the best elements of what they have been doing over the years and sees them continuing to sharpen and harness those abilities. While they can do the whole ‘blazing speed meets technical wizardry’ bit that many in the tech world salivate over, they don’t feel they have to stick to it either. “Deliverance for the Damned” can rage just as hard as most furious tech death metal acts (not to mention as frenetically quick), they are wise to give themselves some breathing room. A polished melodic solo later in the song provides an excellent release from the fury, and also showcases that side that the band can do equally well – run with some urgent and powerful melodies. The 10-minute title track shows a culmination of this ability, as the band hits the gas pedal hard at times, but wraps melodically driven segments all around it, giving it a more majestic sound overall (not to mention giving the listener a bit of breathing room). Some really pretty moments later on really bring the point home – Alustrium can offer frantic musicianship and thrills, but also craft some absorbing longer tracks that keep your ears glued to each second. The sense of pacing is truly key. Despite frequently lengthy tracks, they break them up into digestible bits that give both extreme and melodic fans plenty to chew on without pissing them off either.

A Monument to Silence is a release that should spark an even greater interest in Alustrium. Continuing to find ways to make the music feel more melodic and grandiose without sacrificing the sheer intensity and technical chops should give plenty of folks a reason to check them out. All while hooking them in for the future too.