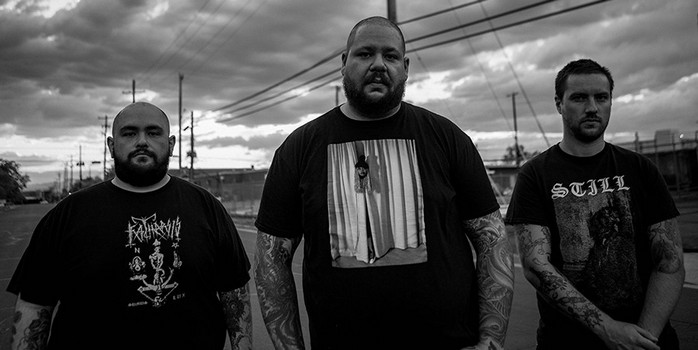 Primitive Man. A band dead-set on leveling venues and shattering ear drums. A group with a singular focus: to be as heavy as sonically possible and to communicate the ills of the world since time immemorial. Life basically is one steaming pile of shit and Primitive Man is doing a commendable job of hammering that fact in our heads for 8 years now. We asked Ethan Lee McCarthy, guitarist and possessor of dinosaur-like vocals from hell, to give his thoughts on their new album “Immersion” and how society still hasn’t changed much in a lifetime.

Dead Rhetoric: Your “baby soft” debut Scorn touches on the themes of revenge and disillusionment, while Caustic is mostly about social injustices, racial tension, and the struggles of wage slaves. What wretched aspect of our world inspired the lyrical themes of Immersion this time around?

Ethan Lee McCarthy: Immersion is mostly about wading in the murky waters of mental illness while trying to follow your dream of living on the fringes of society in a touring metal band. It also touches on themes of inequality, revenge, decaying relationships and so on.

Dead Rhetoric: Jon mentioned that this record was created under grueling conditions and that these were reflected on the intensity of the album. Can you shed some light about the experience of recording Immersion and what did you guys do differently this time around?

McCarthy: This was equally the most difficult and most fulfilling recording session I’ve ever done. The environment of the studio we recorded at (Juggernaut Audio in denver) really lends itself to being able to lean into the creative process. So, instead of being a more mechanical process like previous albums I was able to lean into the emotional aspect and I think it reflects on the recording. So the only real different thing we did was change studios… but it’s what this album needed in order to capture the suffocating vibe that the songs are trying to communicate.

Dead Rhetoric: Primitive Man as a band is a workhorse, touring all over the world for like, half the year. With the current pandemic throwing a wrench on the touring aspect of being a musician, how are you coping with this jarring change of pace as a person and as an artist?

McCarthy: Smoking a lot of weed. Trying to make a lot of harsh noise, write riffs here and there, stay in touch with people and try to encourage everyone to keep their head up. Leaning on my community when I can and just accepting that the road to getting back to music and touring is going to be a long and difficult one.

Dead Rhetoric: Aside from the pandemic, there are ongoing protests for racial equality and calls for justice for the victims of police brutality and accountability. You have had run-ins with cops before, and how have things changed in this aspect based from your experience? What do you feel needs to happen that isn’t being addressed yet, and does your art and music act as vehicles for these concerns?

McCarthy: I definitely speak on these issues in music. Not so much on Immersion this time around. I think that there needs to be an independent organization that reviews all police conduct. They should no longer be able to investigate themselves. Police should be subjected to the same laws that normal citizens are. De escalation training, racial bias vetting, cameras on at all times, no need for tanks, etc… I don’t think that things have changed for the better in any way so far. They just keep looking more and more like batman on the streets, ready to pounce on your ass. Pulling you over for looking a certain way, driving a certain vehicle. If a crime is non violent, you shouldn’t be treated violently. I don’t have all the answers. But I would rather see community helpers than people the entire community is afraid of and has to be subservient to.

Dead Rhetoric: Immersion is noticeably shorter than Caustic, with much of the noise interludes absent this time around. But the songs have all become even more diabolical in sound than Caustic. Do you feel like you have made enough noise music for the meantime with Many Blessings’ Emanation Body that you feel like you need to step back from it for a bit with Primitive Man?

McCarthy: We just had a specific idea that we wanted to convey. And selling a double LP is a pain in the ass. I would have added more noise if we could have but the album just felt complete as is.

Dead Rhetoric: It’s unfortunate that Roadburn this year has been postponed, given that Primitive Man is one of the highlights and all. Do special themed shows appeal to you and would you like to do more of those in the foreseeable future? I was especially excited for the deep cuts showcase.

McCarthy: Absolutely! We were really excited to play a bunch of stuff we haven’t played in a while. So hopefully we can get back to that

Dead Rhetoric: You’ve been a band for 8 years now, how has the chemistry with Jonathan and Joe been going? Do you all still surprise each other with what you bring to the table, songwriting and performance-wise?

McCarthy: We continue to get better at writing songs together and there is still a strong creative spark there for sure.

Dead Rhetoric: With regards to your album art aesthetic, are there any particular artists or films you draw inspiration from these days?

McCarthy: I wish I could say yes but I’ve just kind of been running with my own style, trying to refine things and to constantly improve.

Dead Rhetoric: Your music on the surface strikes many people as abrasive and full of negativity and nihilism, and yet you are a self-professed bleeding heart. Did you ever feel the need to convince people that you aren’t out to rip their heads off offstage or no? What things give you a sense of hope for the world, if anything?

McCarthy: I don’t feel the need to convince people of anything. What you see is what you get. I’m showing you my art the way I think it needs to be shown and i’m not thinking of much else. It’s hard to find hope right now, but it’s all we’ve got so i’m trying to hold onto it.

Dead Rhetoric: The video for “Menacing” continues your tradition of visually arresting short films that are as disturbing as your music itself. Is this particular video’s story drawn from your experiences working in a dispensary?

McCarthy: It definitely helped. But the video is more about communicating how dead end situations and being treated poorly can change someone.

Dead Rhetoric: Thank you for your time and I’ll leave you with a generic “list 5 albums to listen to post-nuclear holocaust/zombie apocalypse” question.

Evoken-A caress of the Void