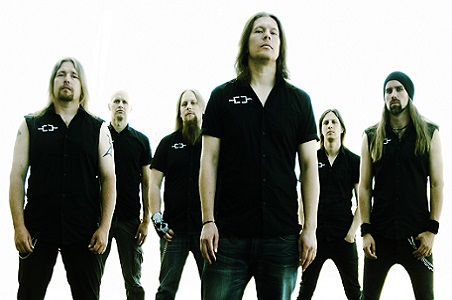 No stranger to these pages or our Blistering.com predecessor, Finland’s Omnium Gatherum have blossomed right before our (and everyone else’s) very eyes. Rewind to 2006, and the band was stuck in label-limbo, dropped by Nuclear Blast after their Years in Waste album failed to move the needle. Furthermore, they took part in a daunting singer swap, moving on from their indecipherable, but oh-so unique Antti Filppu to Jukka Pelkonen. By the time 2007’s vastly underrated Stuck Here on Snake’s Way hit, OG were the embodiment of a cult melodic death metal band, relegated to second-tier status below then high-flyers Arch Enemy, In Flames, and Soilwork.

It wasn’t until 2008’s The Red Shift and in particular, 2011’s unbeatable New World Shadows that OG hit its graceful, monumental melodic death metal stride. By the time their 2013 effort Beyond hit, the band were poised to hop and skip several rungs on the melo-death ladder, which as evidenced by two years of hardcore touring, indeed happen. Today, they, along with Insomnium, are the undisputed top Finnish melodic death metal bands, sharing the common trait of one Mr. Markus Vanhala, OG’s sole original member, and principal songwriter.

The new year brings Grey Heavens, a distinctively compact album that keeps matter tight and taut. OG just fires ’em off, though, with “Skyline,” lead single “Frontiers,” album highlight “The Great Liberation” and “Storm Front” emerging as some of the band’s most crafty and immediate jaunts to date. Coupled with a North American deal with Century Media, Grey Heavens is the obvious “next level” album for OG, so of course, we had to snag the always-cool Mr. Vanhala for a round of Q’s…

Dead Rhetoric: In so many words, can you describe the last two or three years since the release of Beyond?

Markus Vanhala: We went somewhat “beyond” and lived the album name. The previous album got us finally outside Europe too, and we did two long tours in North America and also three trips to Asia. I can say that those were fantastic trips and a young boys’ dreams came true!

Dead Rhetoric: The band has put in so much hard work over the years…how rewarding is it to see it all paying off?

Vanhala: Well, at least I can say it’s satisfying! Do it yourself since the start and this Finnish “never giving up,” attitude together. Playing this music that we love in the best possible company of good friends, spiced up with a possibility of drinking beer while working. That’s pretty okay ha-ha.

Dead Rhetoric: With that in mind, how has the success of the band changed everyone’s personal lives? Or, have things been able to stay the same?

Vanhala: Of course not. This makes your personal relationships like friendships under pressure as you can almost never live the normal life and see them often. Always travelling. So only the best and most understanding friends will survive, and understanding from home is the key point for doing this. It’s not actually always an easy task to take months off from home. Nothing comes for free in life and sacrifices are needed when you really want to do something you love.

Dead Rhetoric: With Beyond (and New World Shadows) doing so well, was there any pressure when coming up with songs for Grey Heavens?

Vanhala: Not exactly. I’m not the kind of guy taking pressures outside; I have enough of them inside ha-ha. It’s always competing with myself and challenging myself to do better stuff than previous one, otherwise this wouldn’t make any sense to do worse album than you did previously.

Dead Rhetoric: The songs on the new album are tighter arrangement-wise. What made you go in that direction?

Vanhala: It was a conscious decision that we wanted to squeeze our output a bit for this release and made a ’lil bit more aggressive in-your-face album. After two more epic ones, we wanted to kick some serious ass and get heads rolling. Angry Old Men Empire strikes back!

Dead Rhetoric: And, you’ve yet to fully take the plunge with clean vocals. Yet, they appear in a few songs. Was there temptation do more of them?

Vanhala: Nope. Omnium Gatherum is still a death metal band and the priority is in death growls. Clean vocals are always a good spice on top and that’s one of our trademarks, too. Patience and discipline with the using of cleans and then the few ones sound more perfect.

Dead Rhetoric: What made “Frontiers” the right choice for the first single? (And I may suggest “The Great Liberation” as the next single.)

Vanhala: “Frontiers” is a good overall example and slice of the album atmosphere. It’s a pretty fucking good OG song, ha-ha. There’s some of that trademarked Finnish melancholy, a bit of aggressive death metal, proggy tech guitar wanking and classic rock pre-chorus and atmospheric clean vox spices too. Why not then?

Dead Rhetoric: You’ve hooked up with Century Media for the release of the album here in North America. What are your expectations?

Vanhala: First time we have a real U.S. label behind us and not only distribution, so waiting on some good things to happen if I may wish. CM have made good things for my another band Insomnium, and they’re nice people to work with.

Dead Rhetoric: Your first experience with a larger label (Nuclear Blast) wasn’t so pleasant. Do you think things will be different?

Vanhala: Hopefully, as times are a changing. We’re not young and (so) stupid anymore ha-ha. Ten-plus years ago many things were different.

Dead Rhetoric: Will the touring schedule for Grey Heavens be as busy as it was for Beyond?

Vanhala: So far it seems that we’ll have our share of airplanes and nightliner busses again. We already started bashing the Finnish gigs and next week we’re heading out for a European headliner tour, and we’ll continue from that tour straightly to do another two-week run with Amorphis in Europe. More festivals and touring follows. It seems that also North America gets their share before the end of this year!

Dead Rhetoric: And finally, the band has gone from a very underground, cult-like melodic death metal band to one of the more popular, and up-and-coming bands in the scene. How does that make you feel?

Vanhala: We never built this band for aiming for big success or being famous or anything like that. Just doing this music and having the inner urge to do this. But I’m not so true and evil underground spirit that it would feel bad for me that the band is getting more and more popular. I even think it’s pretty ok, satisfying and a nice reward for 20 years of work. Never giving up, never surrender!