As serious as many people are regarding heavy metal, we all know a few people who love to emphasize a lot of the clichés and over the top elements of the genre. Branding swords and shields of steel, Stàilinn Drakk are one of those power metal bands that embody all the larger than life aspects of the genre – in the hopes that the audience will join in on the festivities. Snicker if you will, but groups like Hammerfall, Freedom Call, Rhapsody, and Alestorm developed a strong discography right out of the gate during the 1990’s and early 2000’s, in turn developing headlining followings in many parts of the globe as a result – and tend to be a set of influences this band uses to deliver their songs to the underground masses.

Handling these questions are vocalist Samuel de Vries and guitarist Maarten Mies. Prepare to learn more about the origins of their unique moniker, a lot of love for Dungeons & Dragons, and the decision to take a current era pop hit and transform things into a power metal rendition that stands up just as well as the original song. And I’m holding Stàilinn Drakk to some future role playing merchandise, as you can never have enough twenty-sided dice rolls and hit points in your sights.

Dead Rhetoric: Tell us how the formation of Stàilinn Drakk went from a conceptual idea with a lot of band practices in 2013 to the outfit that exists today? Also, how did you decide upon your band name – as it definitely stands out?

Maarten Mies: Every quest starts with a first step and ours was no different. Initially, it was just myself, Friso, Mitchell and Jorg and we just mucked about for three hours during practice. We didn’t have a singer yet, but a lot of our early songs were made during that period. When Sam finally joined up in late 2014, we quickly went from ‘backyard garage idiots’ to ‘performing idiots’. As for the name; we originally started out as Gloryhole, trying to mix Glam Metal and Power Metal. That didn’t work out, so we rebranded to Power. We wanted our name to be as stupid as possible, so we quickly yelled Steel Dragon. A quick dash of Google showed us some movie already took that idea, so I just threw Steel Dragon through an online Tolkien Dwarf translator and here we are.

Dead Rhetoric: You describe your brand of music as heroic power metal – and there are definitely elements that range from Freedom Call and Rhapsody to Hammerfall as well as Alestorm/Gloryhammer both on a musical and vocal front. What qualities do you hope to be able to put across through your songwriting based on these particular influences?

Mies: Mostly we hope to write some damn catchy, over the top power metal. The bands you listed are all influences, especially Gloryhammer and Freedom Call, but they all sound fairly different. The main thing they share: catchy, epic choruses. When we’re writing music, we always keep in mind if the audience can pick up on the melodies in the blink of an eye. If you get a song of ours stuck in your head after we’re done, we’ve done a good job.

Dead Rhetoric: Do you ever worry about being taken seriously because of the over the top imagery and lyrical content, plus fanfare runs and choir-like/bard-oriented choruses – or are these essential to get across what Stàilinn Drakk is all about?

Mies: Sometimes, a joke goes too far and becomes an actual thing. Stàilinn Drakk is kind of like that. We wanted to make cheesy power metal – and we do – but we wanted it to have something fun from our youth, whether that be rolling D20’s and slaying the beast, moving tiny paintable miniatures of Orcs across a board or just swooping orchestral pieces. Somewhere in there we did something right, because people are usually pretty positive about us. We don’t mind not being taken seriously, we’re our own biggest critics and we usually take the piss out of everything we do.

Dead Rhetoric: Tell us about the recording sessions for your debut EP Raise Your Sword – any particular surprises, challenges, or highlights come up, and did things go about as you expected?

Samuel de Vries: We didn’t really have a budget, and so did everything ourselves. Keys and bass were recorded at Friso’s place, drums were programmed and guitars and vocals were recorded in my bedroom, where I also mixed the whole thing. It was a lot of fun to do for me, but also kinda stressful to get everything finished in time. It’s not perfect, but then again we don’t ask for anything in return, except for people to sing along really loud if they like it.

Dead Rhetoric: Who came up with the idea for doing a power metal version of the Miley Cyrus pop hit “Wrecking Ball”? It’s very bold in my opinion and you made it work, instead of reaching back into the proto-typical metal archives for a cover of a song…

de Vries: Thank you! I came up with the idea after a rehearsal and we just went for it. I arranged the song quite fast and tried out some different transpositions before deciding on the final one. I’m pleased with the extra dramatic turn from the intro to the verses, and often that’s the moment where the audience recognizes the song and it works like a charm. “Wrecking Ball” is one of my favorites to perform live.

Dead Rhetoric: Of the three other quests you lay out on your official Facebook page – touring with Gloryhammer, gathering enough money to make your own action figures, or finding Gandalf’s beard hair, which is most likely to occur in the next few years? In the interim, what types of promotional activities can we expect for the band – videos, live performances, role playing appearances, etc.?

Mies: We recently bought a map from an old man in the forest, detailing the location of a majestic castle, where once lived the ancient sorcerer Garibaldi XXVIII, who was said to be bros with Gandalf. We hope to travel there and uncover his secrets. While the Kickstarter is running, we continue to write music and perform, to get our name out there. Perhaps we can record a videoclip in the meantime. But it would be epic to write a Dungeons & Dragons campaign in our setting, maybe that would be good merchandise.

Dead Rhetoric: How do you see the state of power metal today? What qualities do you look for to make certain bands stand out above others, and what is the best power metal show you’ve personally taken in purely from a fan perspective?

Mies: Personally I want my power metal to be over the top and catchy, just like we make it. The emergence of bands like Gloryhammer and Twilight Force, who deliberately exaggerate everything they do are a fine example. Power metal doesn’t need to be serious, it can get away with a lighter air and bombastic orchestrations. It’s perfect for overdoing things. You can party on it. The mainstream acceptance of sword & sorcery like Lord Of The Rings and now with the Warcraft movie is a good thing. The kids can discover there is an entire genre devoted to epic fantasy, and it gives us a reason to exist. The best show I’ve ever seen in power metal would be the very first performance of Gloryhammer, which was held in our favorite bar in our hometown of Tilburg. It was sold out, sweaty and cramped, but everyone screamed the lyrics of their entire debut album, waving plastic hammers around and dancing with horsemasks on their heads. Ridiculous and epic!

Dead Rhetoric: Have you already started working on the follow up to Raise Your Sword? Will it be another EP or possibly a full-length- and is the band interested in exploring more of a conceptual piece down the road?

de Vries: We have enough material ready for a full length, and will start producing it after our summer break. We are still deciding which of our new songs to include and how we will produce everything, but we will make sure our new material will be catchy, cheesy, bombastic, and most importantly a lot of fun. We all have a character on stage, complete with background histories and costumes, and it is certainly important to our music. All of our lyrics revolve around these characters and their adventures. We are a conceptual band, and so a full-length will probably be an epic concept-album of some sort.

Dead Rhetoric: If you had the opportunity to transport yourself back in time, where would you go and what would you like to be? Feel free to elaborate your grand visions…

Mies: I’d probably hitchhike my way to medieval Europe, use my knowledge of things to get myself a nice castle and then basically become like King Arthur in Monty Python & The Holy Grail.

Dead Rhetoric: Which books, movies, role-playing games, and television shows do you find are most important to use as fuel for inspiration in the band’s activities? Is imagery/artwork as important to the band as the musical composition and performances?

de Vries: We draw our influences from pretty much everything related to geeky, epic fantasy. We like to be tacky and be really, really obvious about it. So basically we always search for that guilty-pleasure feeling. As for the imagery; it’s most important in our live shows. We have costumes and swords on stage, and we used to have a cardboard castle to decorate the drumkit, but unfortunately it didn’t make it through one of our shows.

Dead Rhetoric: Where would you like to see Stàilinn Drakk go over the next 12-18 months? What matters more in your vision of world domination – the quality of followers into the group or the quantity?

Mies: Speaking for myself here, but I just want to play some more gigs. I love performing. It’s fun, energetic and watching the people up front enjoy the music is great. Watching the people in the back relent and give in to the silliness of it all is even better. As for fans, I’ll take any we can get. If you’d told us at the end of 2014 we’d have genuine fans, we probably wouldn’t have believed it. Quality over quantity, of course, but in Soviet Russia quantity is a quality, so we’re not picky. As long as we get to spread the shenanigans of Stàilinn Drakk around, I’m content. 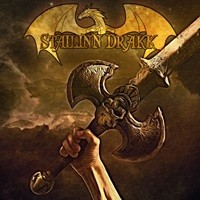