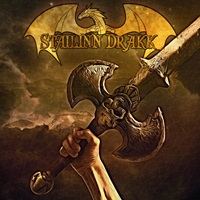 Heroic power metal with a definite OTT meets drinking attitude becomes clearly apparent from the first fanfare keyboard run on the opening title cut Raise Your Sword for Dutch act Stàilinn Drakk. A conceptual idea in 2013 fleshed out with proper lineup additions (Samuel de Vries on vocals a key addition), they’ve been performing live and honing their craft before dropping this debut EP on the market. The bulk of the quintet’s outlook comes from happier, uplifting chord progressions that can be battle-oriented, as if blending together Hammerfall and Freedom Call – while also entertaining the pirate-metal melodies or sequences that make Alestorm so awesome.

Of the three original songs, “Through the Sky” has the most obvious commercial potential, a steady mid-tempo gallop gains credence through the larger than life, multi-part vocal harmonies – encouraging a lot of alcohol-infused audience participation as tales of dragons, swords, shields, and flames radiate through the airwaves. Keyboardist Friso van Daalen probably gains a bit more precedence in the front-line musical hooks, firing off the main call to command riff sequences in the slightly faster “Dragonriders” – the heads down guitars and double bass drumming keeping the hordes into these styles riding for glory. You can almost picture the white dress shirts and battle tested uniforms before even looking at the band promo photos – one would hope that the band also accentuates these aspects discussed in their lyrics on a visual stage show front.

The ultimate surprise is the band’s out of the box interpretation of the pop hit “Wrecking Ball” from Miley Cyrus. Taking it in the power metal vein and speeding up the tempo for the chorus, it does work from a power metal perspective, the guitar leads of Daalen and Timon Groenendijk plus the dramatic, emotional verse change up proves Samuel is the perfect, theatrical-driven fit for Stàilinn Drakk. One hopes that next time the band can spend a little more money (or effort) on the drumming aspect tone-wise, as it’s a little more computerized and distant than normally hoped for – but that’s a minor beef.

In the end, those who dream of fantasy, battles, old school Dungeons and Dragons action will delightfully ‘raise their swords’ to destiny for this effort.