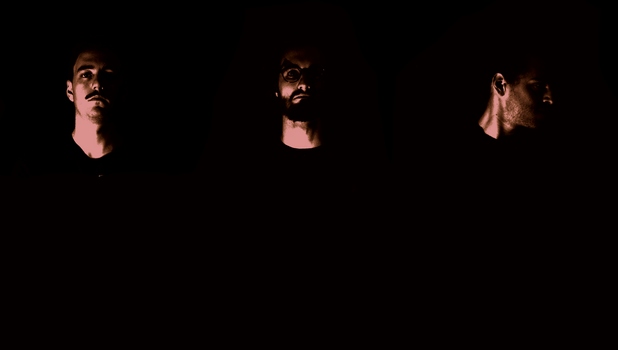 The end of the year is starting to get closer in sight, which means we have to get our ears on as many of the 2020 releases as possible before the new year begins. With so much new music in 2020, it’s a sometimes difficult challenge to keep track of it all, but that’s what makes the Rapid Fire column such a useful tool in getting some more coverage. This month we take a look at Aeolian, Bleakheart, Deathroll, Dethrone, Diamond Head, Jaded Heart, Lizzy Borden, Lord Fist, Pitchblack, Star Insight, and Sulfur Sun (pictured above). 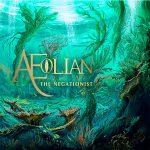 Aeolian – The Negationist (Black Lion Records)
There’s always room to squeeze in some worthy melodic death metal, and that’s exactly what Aeolian provides with their second album, The Negationist. The release is chock full of glorious and fist-raising guitar melodies that will get you moving and grooving. The band wisely changes things up, tempo-wise, over the course of things, even if they do like to dive right into some fast and frenetic melodies on a regular basis. The only slight dip comes from the length of the release, which reaches towards an hour, but rest assured that the melodies will still tickle your fancy even in the later tracks. – Kyle McGinn (Aeolian on Facebook) 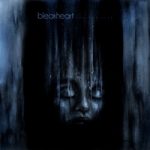 Bleakheart – Dream Griever (Self-Released)
Up for some really gloomy stuff? Bleakheart has you covered on all fronts with their debut, Dream Griever. Featuring JP Damron (In the Company of Serpents) and Kelly Schilling (Dreadnaught), you can get a taste of everything from stoner, doom, and gothic to psychedelic and shoe-gaze-y. It may seem like a lot to take in, but there’s a pleasantly ‘chill’ vibe to it all that keeps you adrift through it’s downtrodden atmosphere while maintaining your interest with fuzzy, warm riffs. A fitting release for the late fall season, as things begin to wither and fade. – Kyle McGinn (Bleakheart on Facebook)

Deathroll – Into the Vortex (Self-Released)
Into the Vortex hits all the high points that an EP should. It’s all about that ‘get in, get out’ energy, and in this case it’s urgent death/thrash that unloads as much frantic riffing as it can in a scant 9-minutes. The band’s particular formula works, offering just the right touch of melody to the tracks to keep you intrigued, whether it’s catchy or groovy, and provides a good outlet for furious headbanging at the same time. For a debut release, there’s a more veteran feel to it (it does feature Kevin Talley on drums) and it leaves the listener with a compulsion for more material. – Kyle McGinn (Deathroll on Facebook) 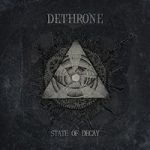 Dethrone – State of Decay (Massacre Records)
Returning after two previous full-length albums, Swedish quarter Dethrone issue a quick hitting four-song EP for State of Decay that doesn’t waste any time getting to the heart of their deadly death/thrash antics. Blitzkrieg riffs, pummeling tempos, and deadly screams are staples for “Divine Supremacy”, “Flesh Harvest” and “Room 101” – the latter containing some incredible blast beats and a monstrous instrumental mid-tempo transition that could launch bodies into overdrive. The influences are easy to spot a mile away (At the Gates, The Haunted, Slayer) but it’s neck snapping, frantic, and non-compromising that levels the competition. In just under 14 minutes, most will just circle back to the opening track and let the beating begin again. Can’t wait for the next full-length. – Matt Coe (Dethrone on Facebook) 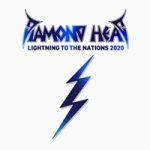 Diamond Head – Lightning to the Nations 2020 (Silver Lining Music)
When veteran groups choose to re-record classic material, usually red flags appear as to intent and execution. Not necessary here though – the current incarnation of Diamond Head very strong lineup-wise, allowing for a 40th anniversary of Lightning to the Nations 2020 to appear. With beefier/modern recording technology at their disposal, “The Prince”, “Sucking My Love”, timeless “Am I Evil” and the title cut still prove to be a mandatory aural part of NWOBHM history – tacking on four special covers as an additional bonus (love “No Remorse” from Metallica in reverse tribute to the band, as well as “Sinner” by Judas Priest). Guitarist Brian Tatler and vocalist Rasmus Bom Andersen keep this act moving forward, allowing for more metalheads in the younger generation to understand their importance for the traditional and power/thrash genres through solid mechanics, riffing, and memorable hooks/songs. – Matt Coe (Diamond Head official website) 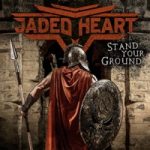 Jaded Heart – Stand Your Ground (Massacre Records)
An old reliable standby in the German melodic heavy metal / hard rock scene, Jaded Heart are now at their fourteenth studio album for Stand Your Ground. Aligning with a heavier guitar sound, the bristling vocal harmonies and versatility from cruising anthems to mid-tempo offerings seem a bit more staccato and modern-driven during “One Last Time” and the Skid Row-ish “Break Free”. A punchy drum sound and solid guitar crunch makes “Embrace a Demon” a highlight, but at thirteen tracks the record loses a lot of dynamic interest – the record could have been slightly better shaving off a couple of songs (“Kill Your Masters” and “Inside a Hurricane” specifically). Not the band of old with Michael Bormann at the helm vocally, that’s for sure. – Matt Coe (Jaded Heart on Facebook) 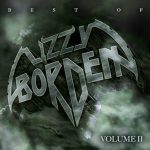 Lizzy Borden – Best of Lizzy Borden, Volume 2 (Metal Blade)
Showcasing his output from 2000-forward, Lizzy Borden on this second best-of compiles 14 selections that include 12 previously released cuts and two special covers from The Ramones and Blue Oyster Cult exclusive to this release. Continuing his mix of theatrical melodic metal and shock hard rock combinations, tracks like “Long May They Haunt Us” and “My Midnight Things” showcase more of the Queen/theatrical side to the band, while “Tomorrow Never Comes” and “There Will Be Blood Tonight” feature more of the engaging guitar harmonies and soaring melodies that put Lizzy on the power/traditional map back in the 1980’s. “Pet Semetary” celebrates Halloween in perfect timing, while “Burnin’ For You” reminds this scribe of the greatness of BOC, Lizzy pulling off the vocal harmonies brilliantly while the guitar and rhythm section support this AOR/classic rock radio stable professionally. Probably best served for those new to the group or ardent collectors who need everything Lizzy Borden related. – Matt Coe (Lizzy Borden official website) 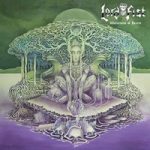 Lord Fist – Wilderness of Hearts (High Roller Records)
Cranking out a straight-forward true metal sound, Finnish unit Lord Fist release their second album Wilderness of Hearts. Front man Perttu Koivunen has a mid-range desperation in his vocal delivery a la Kevin Heybourne of Angel Witch, and his guitar work alongside Niko Kolehmainen contains that twin rhythm/melodic energy befitting those late 70’s /early 80’s NWOBHM standouts (Iron Maiden, Saxon, Diamond Head). Bang thy head to the spider web runs and power of “Wings Drawn in Our Minds”, while “Aurorae” should lead the metal legions into any battle charge, throwing about quick hitting drum fills and proper trills in all the right places. Raw, old-school production values and tones plus another illustration art wonder for the cover proves in the world of Lord Fist, anything after 1985 probably doesn’t exist in their aural metal circle. – Matt Coe (Lord Fist on Facebook) 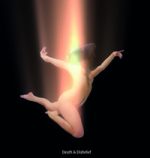 Pitchblack – Death & Disbelief (Emanzipation Productions)
Capturing a modern mix of death metal and groove/thrash, Pitchblack return after an extended hiatus with this third effort. There’s a cool, old school inspired crunch to the guitars – not a blatantly Swedish one, but reminiscent of bands like Gorefest at times, until they really dig into the groovier parts. Occasionally, they go a bit melodic (see “Erase My Race”), and that’s where things kind of teeter. It’s not as confident and enjoyable, instead laying into clunky melodies and clean vocals. It’s a jarring transition, and one that really softens the album’s impact. It would be stronger if they chose a path and stuck with it. – Kyle McGinn (Pitchblack on Facebook) 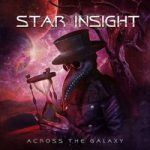 Star Insight – Across the Galaxy (Inverse)
Having released their debut album, Messera, back in 2014 it has been a bit since we heard from Star Insight. Merging parts of melodic death metal and symphonic metal isn’t really breaking ground, but to their end, the vocal mix of growls and sung (and occasionally operatic) female vocals is given a heavier background than many bands in this ilk. Unfortunately, it’s mostly bland territory from beginning to end. Nothing bad per say, but it never really grabs you the way that an album like this should. The hooks seem to be sorely lacking, which is a bummer given the appropriate heaviness they can wield. – Kyle McGinn (Star Insight on Facebook) 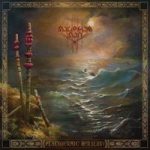 Sulphur Sun – Placodermic Heraldry (Total Dissonance Worship)
A short but sweet little taste of a release, Sulphur Sun brings otherworldly aggression to the table. There’s an eerie atmosphere that soaks through the songs, but there’s also lots of death metal riffing to dig into. Dallas Toller-Wade was tapped to do the guitars for this one, and the riffing is usually quite frenzied and chaotic, offering some immediacy to the otherwise creepy and almost dissonant atmosphere. Sure to bring in the Nile and Artificial Brain fans with ease. – Kyle McGinn (Sulphur Sun on Facebook)