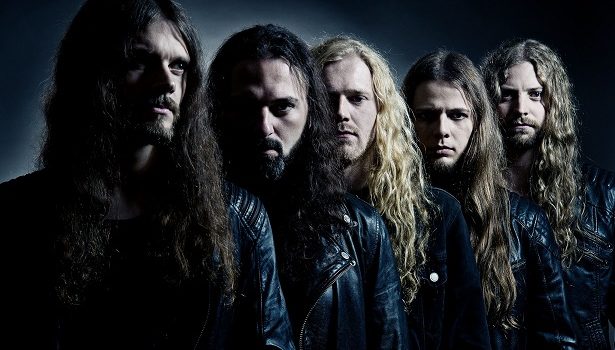 At the time of this writing, Germany’s Nailed to Obscurity are holding down the opening spot on Amorphis and Soilwork’s co-headlining European jaunt. Being that most of the shows have sold-out, it’s a prime opportunity for a semi-unknown band such as Nailed to Obscurity to show their wares, which, given how far Amorphis and Soilwork’s respective sounds stretch, makes it an ideal fit. Originally a technical death metal band upon their 2005 formation, the Germans have since lightened up on the fretboard gymnastics in favor of a more melodic and atmospheric sound, something reflected on their latest and first effort for Nuclear Blast, Black Frost. A band who is continually shedding its death metal shell (clean vocals abound on Black Frost), Nailed to Obscurity appears to be on the same sonic trajectory as their current touring partners. Not bad company to be in…

Dead Rhetoric: You formed in 2005. What were the early days of the band like?

Volker Dieken (guitar): Ole and I started as a duo first, just jamming around together. It took us some time to complete the first line up of NtO and in the end, the first constellations didn’t last long for different reasons. In general, we had to take a long road until we found the right constellation, personality-wise but also regarding musical abilities. We come from a very rural area. Even though there is a big underground scene for metal music, it was difficult. In the beginnings we were just writing songs without a real concept behind it, just writing for the love of music and to play some shows, so to speak. A breaking point for the band was when Jann [Hillrichs, drums] and Carsten [Schorn, bass] and later Raimund [Ennenga, vocals] joined the band. From there we´ve found the perfect members in every aspect, all focused and being eager of doing the next steps. After the release of Opaque in 2013 things really started to go in the right direction. Since then (and even before) all of us have become close friends and our working dynamics have developed with each release. Everything we do together feels just great!

Dead Rhetoric: It has been noted you added elements of doom because playing technical proved to be too difficult for the band. Have you ever thought how Nailed to Obscurity would sound if you decided to go full-on technical?

Dieken: Well, it’s just that back in the day when we started, we were listening to classic death metal a lot. In addition, in the region where we come from this kind of music, especially brutal death metal, was very popular. So we kind of felt obligated to go in that direction. It just turned out very quickly, it wasn’t what we really wanted to do and on top, we also weren’t able to,
I really cannot imagine how our sound would be like nowadays if we would have gone full-on technical. But what I know is, that there are a lot of bands out there who perfected this genre and do this kind of music much much better than we could have ever done it.

Dead Rhetoric: Cross-breeding various styles within metal is nothing new, but your combination is unique and sometimes hard to describe. Do you see that as an advantage or a disadvantage?

Ennenga: I absolutely see this as an advantage. People are putting a particular label on a band very fast. From that moment on, it’s hard for a band to start its own evolution because some albums aren’t fitting with that label anymore. It’s a rare and a good thing when people consider you to be unique. We know where we came from and we know our roots but we want to be able to evolve as a band. Through this process, we created our own sound and it’s great that people seem to feel alike and recognize us by our sound and style.

Dead Rhetoric: What would you describe as the turning point in your career? The Opaque album?

Dieken: On the outward appearance of the band the turning was definitely the release of Opaque. But behind the curtain, it was even earlier, when Jann and Carsten joined the band. From there the instrumental line-up was completed and we found our sound. Of course, when Raimund joined during the recording of Opaque, things really took another turn and from there on it just got better and better.

Dead Rhetoric: How did you end up signing with Nuclear Blast?

Ennenga: We were very happy with everything Apostasy Records and its owner Tomasz Wisniewski did for us. But we really wanted to do the next step in our evolution as a band. One day, Tomasz asked us to search for a suitable label for the band’s further as our new manager. We agreed immediately and he came up with some offers by very well-known labels. Nuclear Blast was the label that we really wanted to be part of. So we checked the offer and felt that it was 100% fair. Then, it was a no-brainer, because you only have to take a look at the label’s roster. I mean Slayer, Opeth, Paradise Lost, Sepultura, Amorphis, Soilwork… you name it. We are very proud to be a part of this family.

Dead Rhetoric: From there, what are the expectations now that you’re on one of metal’s biggest labels?

Ennenga: It’s just great. Like I said before, it is just a phenomenal roster and great people that work there as well. They don’t make a difference between us or the more established/ bigger bands. They treat us incredibly well. They deserve to be such a big label because these people are full of passion — and I don’t get paid to say this!

Dead Rhetoric: Was there anything that you learned from King Delusion that you applied to Black Frost?

Dieken: With King Delusion it was very difficult for us to implement “alternative” vocal techniques (clean, whispering, etc) into our songs since we didn’t really put a focus on them during the writing process. That we changed during the songwriting of Black Frost. Already in the beginnings of the sessions, we already tried to imagine how and where we would implement a certain vocal style. That automatically resulted in a change of the entire instrumental constellation. We used to put a strong focus on the guitar section on previous releases and with Black Frost, we pulled them back a bit. Meaning reducing powerful leads to parts where they really can make an impact in the song and with that giving room for all other instruments and the vocals.

Dead Rhetoric: Black Frost conveys a wide array of emotions, but you never overdo anything. Is that on purpose? Or, just a natural occurrence?

Ennenga: We really put a lot of effort into every single song. The most important thing is the flow of a song. We don’t do a certain part to “show our muscles.“ Everything we do has to fit with the mood and the atmosphere we want to create. This goes for the instrumental parts as well as for the lyrics and the way they are presented. The song is always in the center of our attention.

Dieken: As Raimund said, we really put focus and lots of effort into each song. And we do so until everything fits for our taste. Sometimes it is difficult to find the end of it. But we are aware that you easily can mess up a song if you don’t find the right point and say: “It feels round now and it’s done and fine like this.” Of course, in the end, it’s all a matter of personal taste if you find the right amount or the perfect balance of emotions.

Dead Rhetoric: Unlike some bands of your ilk, it appears a lot of emphases is placed on vocals. Can you vouch for that?

Ennenga: Yes, we really put a lot of attention when it comes to the placing of the vocals. When the basic ideas are being finished, I try to find fitting topics for the mood of the songs and write what comes to my mind. I also try to find out which “voice” might fit best. The other guys also have their ideas and so we try to find a “version” that appeals to everyone in the band. This time, we changed the process up a little bit. We went into the studio a couple of weeks before the actual recordings and did pre-production with our producer V. Santura. Besides talking about the songs and their arrangements, we worked on the clean vocal-lines. It helped a lot to be able to record them in a proper way. This allowed us to get a better idea of how they would work. During the final recordings, I also tried a lot of different voices like breathed clean vocals and whispering etc. It was like exploring my voice in a new way.

Dead Rhetoric: What kind of lyrical themes are found on Black Frost?

Ennenga: I like metaphors. The listener is able to find his/her own key to the lyrics. But the lyrics are all about struggling with yourself and sometimes shows ways how to get rid of self-doubts and fear. For example, “Feardom” refers to the feeling of not being alone. There is an aura that follows you but you can’t explain what it really is. Is it a part of yourself that tries to find its way out of the oppression? Maybe you have a certain image in your head right now because you might have felt this way before. And this is more important than my personal experience behind this song-idea in particular. All lyrics are very personal but I try to keep the lyrics open to any kind of interpretation.

Dead Rhetoric: Finally, what’s on your agenda for the rest of 2019?

Ennenga: We are currently on tour with Amorphis, Soilwork and Jinjer all over Europe in support of the album. But there is a lot more in the making. We want to play as many shows as possible to present Black Frost to a lot of people. We want to touch new ground as well as playing in front of friends and fans we already know because these people are the ones who brought us here! 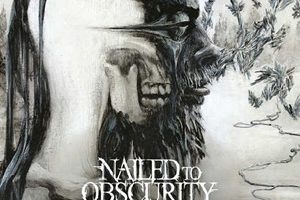