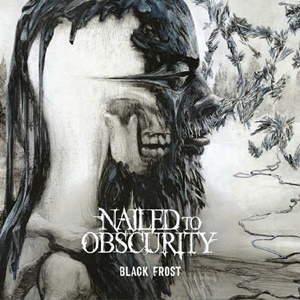 There’s something to be said about slow, steady progress when working up the metal ranks. The thought of ‘overnight sensation’ (a great Motörhead album from 1996) rarely occurs in this genre – bands usually needing several releases and consistent promotion/touring to cement themselves as proven entities. German doom/death band Nailed to Obscurity fall firmly into this category – arriving in 2005, releasing a demo and self-financed album Abyss before signing to Apostasy Records and releasing two more full-lengths. Black Frost as the fourth album could be a game-changer, their first for Nuclear Blast – a proven juggernaut in worldwide metal.

On the surface, the quintet favor more of a looming gothic/doom sound, where the death metal angle comes in mostly from the growls that penetrate a majority of the vocals, and the occasional reference to early 90’s pioneers such as Paradise Lost in terms of sheer heaviness. The echoing riffs throughout “The Aberrant Host” bring about feelings of The Gathering meets Swallow the Sun as drummer Jann Hillrichs embellishes those pounding grooves with punishing fills of thunder. Guitarists Jan-Ole Lamberti and Volker Dieken provide the ample low-tuned riffing plus complimentary clean or counterpoint accents that fans of this genre crave, thoughtfully sparse and building out the emotion to its final capacity on the highlight “Feardom”, allowing Raimund Ennenga to switch off between measured growls and semi-melodic, whispering melodies. The record shifts between shorter constructs of five minutes and change to the expected seven/eight-minute epics, smartly alternating in the track listing to prevent possible ear fatigue – and it’s on many of these longer songs that you hear progressive rhythm section passages against the normal melodic doom/death verses where the band places those earworms that hopefully keep your interest.

While Black Frost has many cool parts to it (the ethereal transition after the vicious chorus in “Cipher” to move into Rush meets Swallow the Sun euphoria this scribe’s transformative moment), there just seems to be a familiarity to the riffs and structures that doesn’t place Nailed to Obscurity in that upper tier level that most Scandinavian acts have achieved with this blend. It’s not bad, it just sits in the aural landscape floating without a firm grasp of individuality – harder to achieve in today’s landscape for sure.