Thursday, 2nd May 2019 By Katarina McGinn 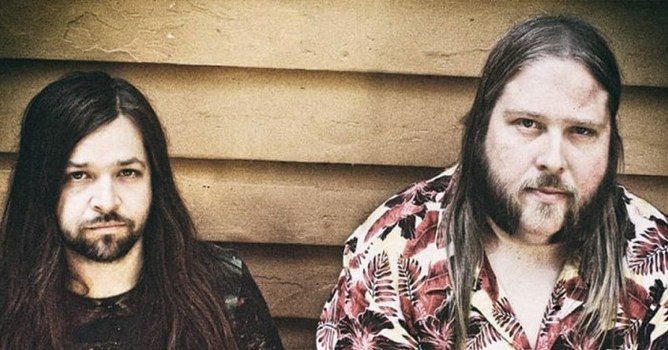 It’s been a few years since we’d gotten any new music from Lord Dying. The sludgy act chose not to sit still in that time though, as they continued onwards on the road, and took some careful time in writing the follow-up to Poisoned Altars. With an extended period, they were able to flesh out a concept album that pushed them forwards as a band. Instead of a sludgy attack, more psychedelia and prog took the reins at times, giving them a more well-rounded and hard to categorize approach, while keeping the band’s strongest assets intact. Just prior to the album’s release, we were able to grab guitarist/vocalist Erik Olson to catch us up on the band’s doings, from the music to the elaborate artwork that adorns the cover.

Dead Rhetoric: Any reason for the 4 year wait in between records?

Erik Olson: The last record, Poisoned Altars, we put out in 2015 and we toured pretty heavily on it. We didn’t start writing Myserium Tremendom until 2017. We spent about a year and a half writing it, which is what we wanted to do. We wanted to make this record with no distractions, and focus on the songwriting aspect of it. Then we recorded it in August of 2018. So it’s taken a while for it to come out. It took a little while to get the pieces right. We wanted Steve Dodd to paint it, and we got him to do the cover. It’s finally coming out!

Dead Rhetoric: What do you feel that the band has improved upon for this album compared to your previous efforts?

Olson: It’s a lot different – it’s a little bit more prog and psychedelic. There’s still some sludge elements. It’s really where we wanted to take the band. We wanted to go in a different direction. We also wanted to expand on our ideas of what we like about music, and keep it interesting for the listener and ourselves as well [laughs]. We wanted to make a record that didn’t really have any genres to tie into. We wanted to do a concept album and take it where it went. That is a different approach than we have done in the past – we worked on it part by part. We built a home studio and demoed everything and pieced it together meticulously before considering it to be finished.

Dead Rhetoric: Do you feel that doing a concept album allowed you to further expand the band’s boundaries to properly give it the sound it needed?

Olson: Yeah, I think that it’s important to try to do that. We tried to think outside the box on this one for sure. I think Chris [Evans] and I are the core – we did all of the songwriting and I think we were both pushing each other. That was definitely an aspect of what we were trying to do.

Dead Rhetoric: Could you go into the concept of the record, and how you stated you wanted to write about life but ended up talking about death instead?

Olson: The record is called Mysterium Tremendom, which is Latin for Terrible Mystery. It’s a term that’s encompassing of all things. To me, it means the journey of not just life but death, and the journey before and after. It’s sort of like ouroboros – a cyclical thing. Originally, I think that when we first started writing, we wanted to do something moreso about life, but we both ended up dealing with death and having family members either die or coming close to it. I think that influenced the way the record went. It forced us to examine what we think about life & death in general as well. I think it played a big role in it. It probably made it better to be honest. But it made it cathartic to write.

Dead Rhetoric: You started to discuss this already but could you go into the ‘70s-esque cover art of Mysterium Tremendom? It’s really gorgeous.

Olson: Thank you. It was painted by Steve R. Dodd – we found out about him a few years ago. One of our favorite Instagram pages is called ‘70s Sci-Fi Art. It’s all this art, mostly from novel covers of old sci-fi books from the ‘70s and ‘80s, and I just love that art in general. There was one artist that we both thought was incredible, and every time it was Steve R. Dodd. So we decided we needed to figure out how to contact him. We knew he would be perfect for this record, as we wanted something that was more colorful and psychedelic, but also very much a different world and landscapes. He specializes in that it seems. You can look at a lot of his stuff on there – he’s been doing this for 40-50 years. It’s crazy.

It wasn’t easy to find him actually. We found out who ran that page, and it was a guy who plays in a progressive rock band from Tasmania. He actually knew how to get a hold of Steve. Steve is American, however, he doesn’t have a phone or Internet. We had to get a hold of his sister, who wrote him a letter [laughs]. I know it sounds crazy, because it really was a crazy story [laughs]. To be honest, at first I thought maybe it was too much. There were too many scenarios where it wouldn’t work out. But I’m really happy with it. To make it better, he’s really psyched on it too. He gave us another piece of art for our tour poster we did, and we are discussing doing another one as well. It’s pretty awesome that we were able to get a hold of him.

Dead Rhetoric: What led to signing with eOne?

Olson: We put out two records on Relapse, which was great. eOne was interested in us. We knew about them because several of our friend’s bands are on there, and some internal things happened with Relapse as well. We knew they were interested, so we went over and they made us a great offer. They have been great so far. They were behind our idea of the album artwork too. Steve R. Dodd painted the cover, and the inside, and it’s a gatefold. It looks amazing. It was really cool, because we haven’t ever really had anybody want to invest that kind of money into a release, or do a double-gatefold thing. We knew Crowbar, Black Fast, and High on Fire – they put out great records for them and they all had good things to say about eOne. We are happy to work with them.

Dead Rhetoric: Could you discuss the relationship between yourself and Chris Evans, and how crucial it is to Lord Dying?

Olson: I think that without it, it wouldn’t be the same. There’s something that happens when you write music with someone for that long. We don’t even really need to communicate words as much [laughs] when we are expressing an idea we are trying to do. It happens right away. It becomes more natural. We’ve been doing bands now for like 20 years now, and almost 10 years for this band. I think that has been a big part of the band, especially the way things are going now. I think it’s something we are really happy about – it’s not something that you can just go out and find. We have honed in over the last 20 years, which is great. I think because of us having such a long working relationship, we know the right ways to push each other to get the best out of each other.

Dead Rhetoric: What do you feel are some important lessons you’ve learned from Lord Dying?

Olson: Never giving up – we certainly don’t make a living doing this. It’s been a labor of love. So I think it’s important to do what makes you happy as a musician. It has to be a labor of love, or there’s no point in doing it. I think that’s the biggest lesson I’ve learned.

Dead Rhetoric: You did a travel feature for Metal Sucks – does being a fan of traveling help with the amount of time you spend on the road?

Olson: Maybe – I do love to travel. It’s a huge passion of mine for sure. It may have helped getting us out there in the beginning. I have always loved travel, but I never did any international travel until Lord Dying did international travel. The first time I left the country was when we had a show in Canada. Then the next time was Mexico, and then Europe. I think that it works both ways – it’s a symbiotic thing to be honest.

Dead Rhetoric: So getting out of the country helped to spark that urge to explore more?

Olson: It helps, for sure. I do plenty of trips on my own – either solo trips or with travelers from all over the world. I almost always do solo trips at the end of a tour if we go to Europe. The band pays for me to get over there, and then it’s pretty cheap to fly from anywhere in Europe – Asia, Africa – it’s a lot cheaper from there, other than the Americas. Just because it’s closer.

Dead Rhetoric: What are some of your other passions beyond music and travel?

Olson: That’s about it [laughs]! I like to read. To be honest, music and travel are essentially everything I do. I don’t have too much more going on. I spend all my time working to afford to travel, then I travel or tour [laughs]. That’s about it!

Dead Rhetoric: What’s next for the band after the album is released?

Olson: There will be lots of touring. We have a US/Canada tour coming up – May 8 to June 8. We will be out for a month doing that. Then we go back to Europe in October. I’ll be doing some traveling myself in between there. Then there’ll be a lot more tours. We’ve also started working on the next record too. Hopefully this one will be finished in a more timely manner and it’ll be ready to go as soon as this album cycle is over so we can just keep it rolling.